A Hair Transplant with a Natural Hairline Made Possible for Dr .U’s Patient

This patient from Torrance, Los Angeles opted for a  Dr.UGraft ™ Follicular Unit Extraction (FUE) hair transplant with a natural hairline. He also wanted to restore coverage in the areas that were still bald and thinning due to a strip surgery performed at a different clinic which produced poor growth.

The Dr. U Hair Cinic not only met the basic expectations of this surgery but also exceeded them as well.  The patient was ecstatic with his outcome, especially after he received feedback which confirmed how undetectable his results were.

Can Hair Transplants Look Natural – Before Photos of Torrance Patient

Despite the time and finances the patient invested in his first surgery performed with the strip method, most of his grafts failed to grow.

This left him with continued hairline recession along with empty sparseness on his top scalp and crown. Also, he was left with a large linear strip scar on the back of his head. 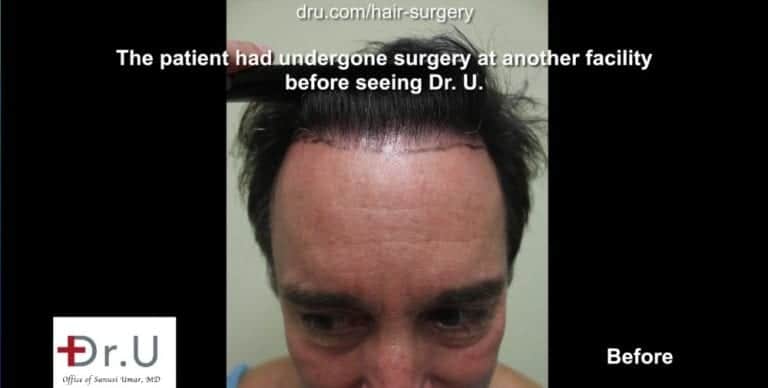 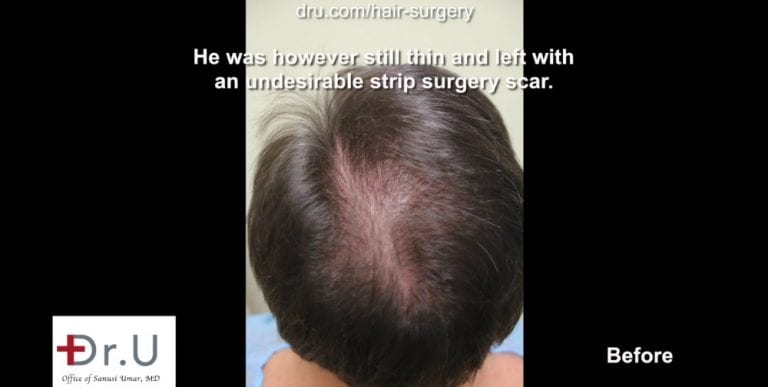 Patient not only hopes for a hair transplant with a natural hairline, but also coverage for the areas of failed growth. 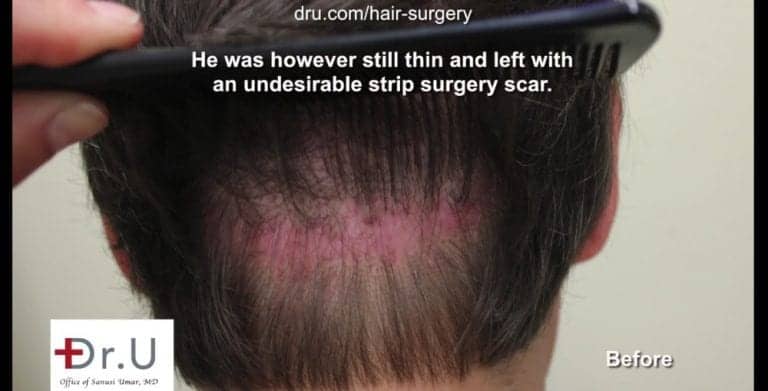 Many people ask, “Does a hair transplant look natural?” after a strip surgery with a large, obvious scar remaining.

After these type of disappointments, many people might start to wonder if it’s possible for hair transplant surgery to produce such incredible outcomes that others would attribute to just having good genes.

However, skepticism was not the case for this particular patient.  After learning about Dr.UGraft™,  he felt a strong sense of certainty about being able to achieve a positive outcome. 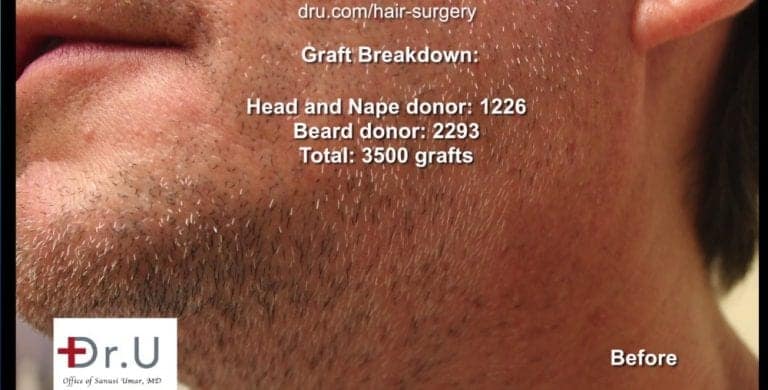 The Dr.UGraft™ System was used to extract a total of 3500 grafts, according to the following breakdown:

The patient’s previous surgery had exhausted much of his remaining head hair.  Beard hair was able to expand his donor supply. Nape hair was also applied to reflect the soft caliber of hair found in the outer edge of natural hairlines.

Hair shafts from these types of grafts tend to grow at much smaller, sharper angles and shift direction beneath the skin.

The visible part of the hair becomes an unreliable cue when using a general cylindrical FUE punch to trace a straight path to the actual graft without inflicting damage to it.

To solve this issue, the Dr.UGraft ™ technology is designed to accurately self-navigate the course towards the follicle, regardless of hair angulation.

A Dr.UGraft ™ hair transplant with a natural hairline is able to use grafts from the leg, nape or other areas of the body using specialized technology.

The intuitive features of this instrumentation also prevent typical surgical injuries to the grafts which then contribute to poor yield.

This form of problem-solving engineering makes it possible to consistently extract healthy, unharmed grafts at scale.

Dr.U skillfully and precisely create insertion slits for the grafts, based on natural occurrence to reflect important details such as density, direction, and exit angle.

To restore a proportionate framework around the patient’s face, it was also necessary to renew the hairline and temples.  The transition of the temples to the hairline was a critical element to produce a flattering and true to life outcome.

Before and After the Dr.U Transplant with a Natural Looking Hairline

Here are photos which compare the patient’s photos before his procedure at Dr. U Hair Clinic to his final end results. 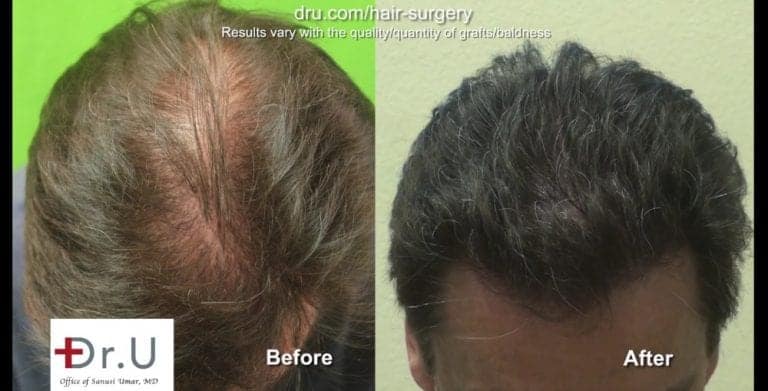 Does a hair transplant look natural? Dr.U’s results show that the answer to this question is a resounding yes.* 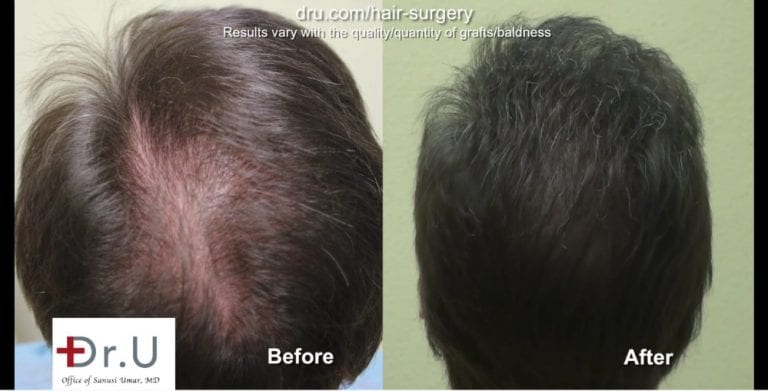 Results like these before and after photos have earned Dr.U many positive natural hair transplant reviews.* 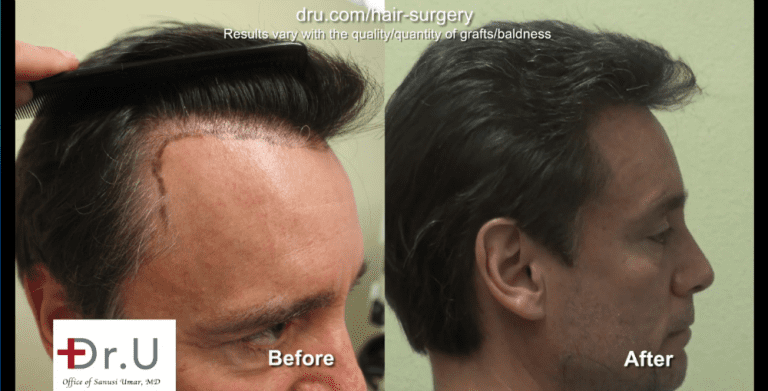 A hair transplant with a natural hairline must focus on the transition of the temples.* 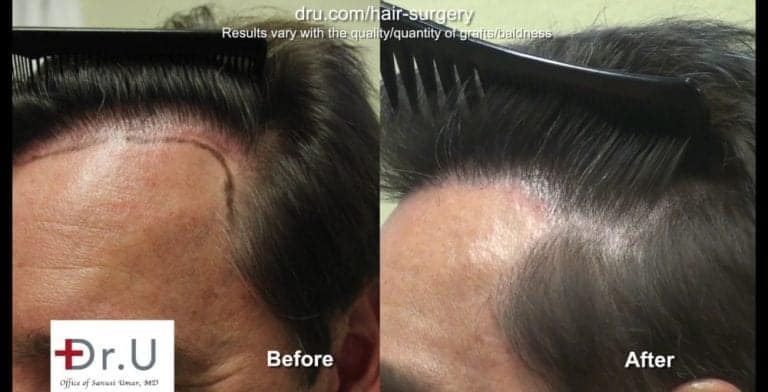 A Dr.UGraft™ undetectable hairline transplant focuses on intricate details for the temple region.* 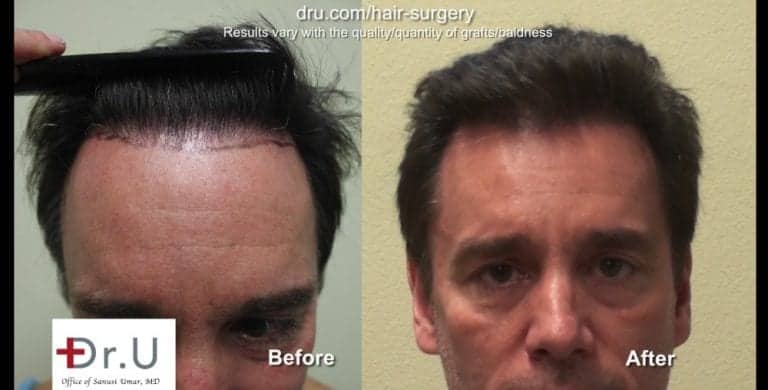 A hair transplant with a natural hairline should have a soft outer edge.*

In his testimony, the patient recounts an interesting story after his surgery when he sat in a meeting with the marketing director of a hair transplant brand who was describing the procedure.

The gentleman turned to the patient and said, “ You wouldn’t understand. You have a great, full looking head of hair.”  The Dr.UGraft™ repair and hairline reconstruction results were apparently so undetectable that the marketing director of a hair surgery company assumed that the patient had never encountered problems from hair loss in the first place.

Watch this video to learn more about this patient’s journey to repair the failed growth from his strip surgery with Dr.UGraft™ advanced FUE.

If you would like to speak to Dr.U about undergoing a Dr.UGraft ™ hair transplant procedure, feel free to mention your areas of concern through our complimentary online consultation form found here:

FAQ – A Hair Transplant with a Natural Hairline

Is there such thing as natural looking hair transplant plugs?

No, hair transplant plugs can never look natural. The term plugs and grafts have been used interchangeably. But they are not the same. Hair plugs refer to large, unnatural clusters of hair that are inserted into the patient’s scalp. They are the result of using large-sized punches from prior decades.

Modern hair transplant surgery methods now rely on the extraction of naturally occurring groupings of hair called follicular units which produce far more realistic looking results, unlike the doll-like hair plugs which are an obvious giveaway that the individual had surgery done.

If I want a hair transplant with a natural hairline, can I recreate my original hairline? Or can I have a different shape for my hairline and not the one I was born with?

Depending on what is most appropriate for your final appearance, you can either restore your original hairline or create a new shape, positioning or details altogether during your consultation.

For example, a person who originally had rounded hairline contours may decide on a straighter shape. Or a patient may want a widow’s peak in the center of their hairline, which was not there originally.

The final determinations are based on natural correspondences that occur universally between the hairline and temple contours, along with an individual’s facial skeletal anatomy.

At Dr. U Hair Clinic, we also rely on the  Rule of Thirds (aka the Golden Ratio) as aesthetic guidelines for producing the right symmetry for placing the hairline framework.

What should I look for when reading natural hair transplant reviews?

First, look for accompanying before and after photos of different patients featured at various angles. The hairline and temples are extremely important because the framework around the face is what onlookers will notice immediately.  Pay attention to the general shape, positioning, and caliber of the hairs. When thick hair from the mid-rear scalp is used, this produces a harsh, wall-like effect.

Also, it would be helpful if you can also find testimonies from patients about the feedback they had received from other people.

If you don’t see your question about hairline transplants answered above, ask Dr. U:

Read about this patient of Dr. U who received a slightly different hairline than the one he was born with

Learn more about the first ever use of leg hair for the  hairline performed by Dr. U