A Silhouette Lift is performed with dissolvable sutures threaded into tiny absorbable cones to perform a gentle lift and repositioning of sagging skin.  It is commonly referred to as the “no knife facelift” or the “lunchtime facelift” and applied for laugh lines, jowls, the neck, sinking facial areas, asymmetric and drooping eyebrows.

The Silhouette Lift procedure usually takes 45-60 minutes without the need for hospitalization. This relatively young female patient from Beverly Hills, Los Angeles was unhappy with the sagging appearance of her cheeks as well as the beginning signs of jowls. However, these mild signs of aging did not qualify for a full facelift. Instead, they were resolved remarkably with a Silhouette Lift, performed by Dr.U.

Patient Photos Before Her Silhouette Lift

These images of the patient before her procedure show minor signs of sagging in the cheeks along with deepening nasolabial folds, which indicate the early onset of jowling. 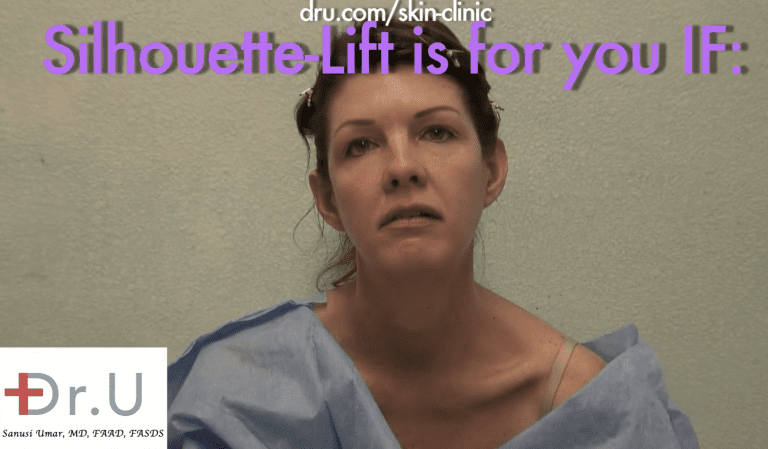 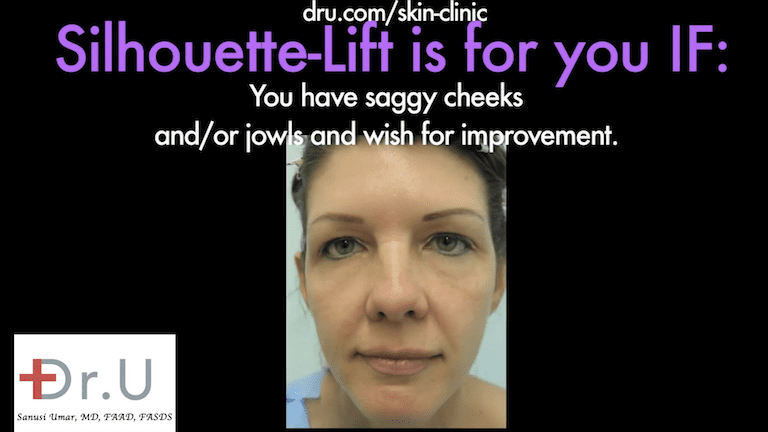 The patient wanted to reverse these issues through a natural looking tightening of her skin which would be achieved with her non-surgical facelift.

The Silhouette Lift is performed with absorbable, biocompatible sutures and cones made of an FDA approved material called Polyglycolide/ L-lactide, which has a top-notch safety profile and also used in cardiovascular and ophthalmic surgery.

The cones themselves are pre-strung onto the suture thread at intervals. Their purpose is to serve as anchors within the designated treatment region helping to produce the tension needed to tighten and redrape the loose skin. 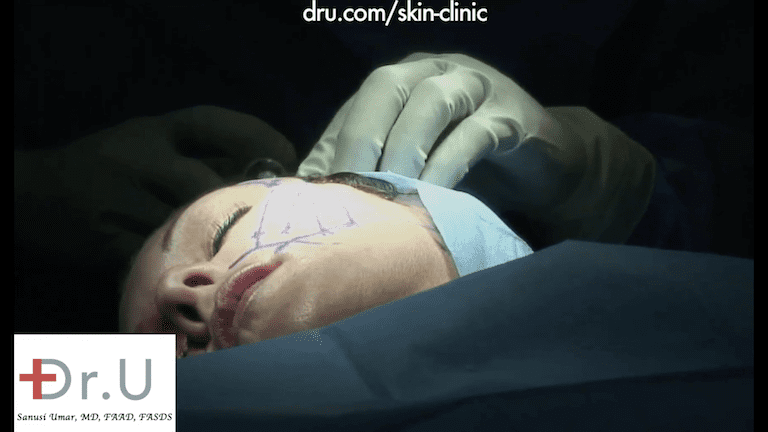 Dr. U marks the patient’s face for her Silhouette Lift procedure.

First, Dr. U marks the insertion and exit points as well as directional guidelines for the sutures on the patient’s face. He then injects these areas with local anesthesia.  The level of discomfort that patients experience from Silhouette Lift procedures is comparable to treatments with fillers.

The suture thread, along with the cones,  are then inserted into an entry point and out through an exit point on the face. This patient received four sutures on each side of the face, altogether treated with eight sutures.

The row of cones remains beneath the surface, helping to raise and tighten the skin. They are then pressed downward and anchored into the tissue so that the sutures don’t migrate. Dr. U  elevates the sagging tissue and ensures that the results are anatomically correct.

With this technique, there is no cutting or need for stitches. This is why the procedure is considered non-surgical.

When the cones dissolve over time, they stimulate the body’s inflammatory processes. As the surrounding tissue heals, new collagen is produced. In addition to the tightening, many patients notice a big improvement in the quality of their skin as a result.

Non-Surgical Face Lift Before and After Photos

These before and after photos depict the natural looking improvement that the patient wanted.

The first set of photos shows her at just four days following her Silhouette Lift, after the swelling had subsided. The initial sagging in the cheeks has improved immensely as well as the nasolabial folds around her nose and mouth. 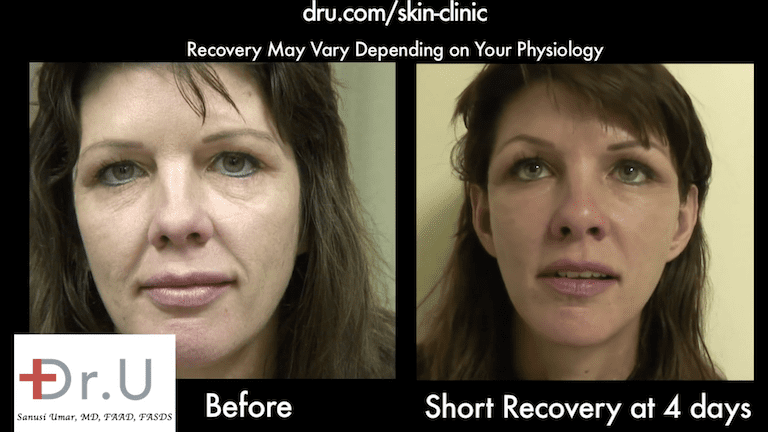 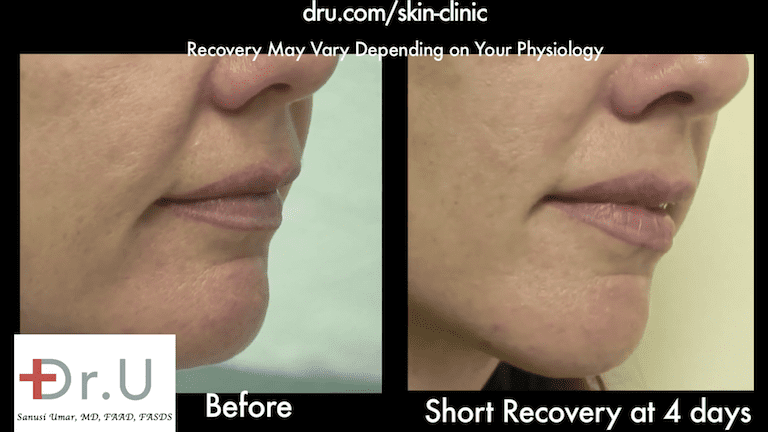 Sagging cheeks no longer produce a fold over effect thanks to the Silhouette Facelift.* 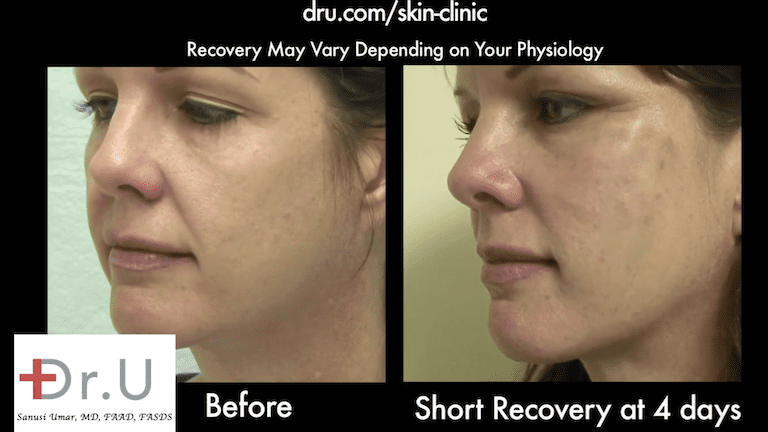 Nonsurgical facelift before and after photos show a firmer appearance in the patient’s cheeks.*

The second set of photos shows the patient at eight months after her Silhouette non-surgical facelift and two weeks following treatment with Hydrelle injections to further fill in the nasolabial folds.

Hydrelle is a hyaluronic acid filler used to add gentle volume to the tissue of a treatment area. For this patient, it contributed to further improvement in the nasolabial creases which, at this point, appear far less deep and severe. 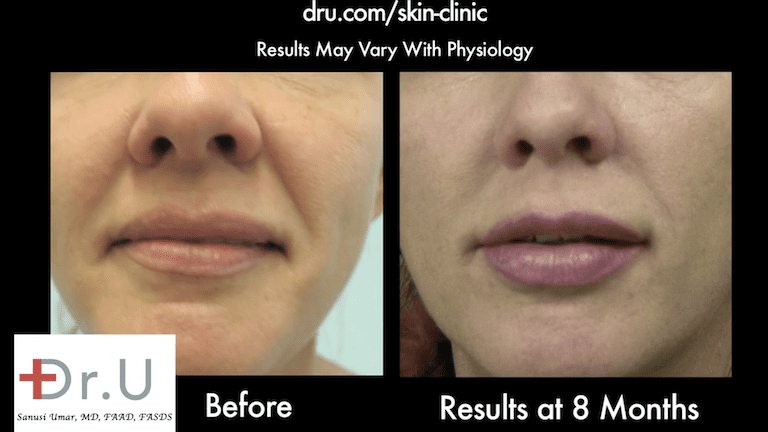 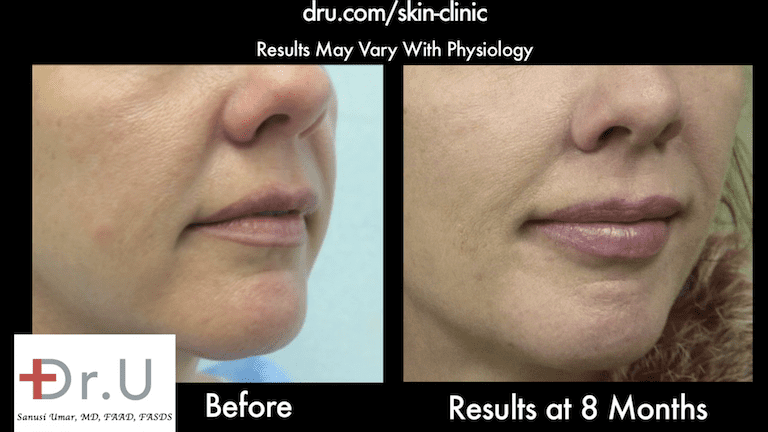 With both the nonsurgical Silhouette Facelift and the hyaluronic derm filler injection for non-surgical jowl lifting, the patient experienced an incredible transformation which rejuvenated her entire appearance.

The patient is very happy with her results and reports that she feels younger and would certainly undergo the procedure again.

Watch this video to learn more about this patient’s experience with the Silhouette non-surgical facelift.

If you are wondering if a Silhouette Lift is a right choice for your areas of concern, submit your information and photos to Dr. U through our complimentary online consultation form.

What is a facelift? How is it different from the Silhouette Lift?

A facelift is performed with a surgical scalpel as opposed to a guide needle with the Silhouette non-surgical Facelift.  It is most often done on patients who have excess skin that needs to be cut away.

In a traditional full facelift, the incision starts at the temples and proceeds down the sides of the face to the front of the earlobe then continues behind the ear and ends at the posterior hairline.

The surgeon then modifies, repositions or redistributes problem areas within the deeper facial tissues  (e.g. fat and muscles) contributing to an older appearance. The skin is redraped over the improved contours. And finally, excess skin is trimmed away.

This method is very invasive and will leave linear scars that must be kept carefully hidden.

Silhouette non-surgical facelift candidates, like the patient discussed above, did not have issues that were severe enough to justify a full facelift or a limited incision facelift. As seen in her before photos, she does not have excessive loose skin. Instead of highly invasive linear incisions, small discrete needle points create entries into the skin to create a tightening effect using the absorbable sutures and cones described earlier.

A Silhouette Facelift is not an alternative to a facelift. But it can help delay or postpone the need for this type of surgery, which is why Dr.U refers to it as a “preemptive strike against a facelift”.

How much does a thread face lift cost? Is the Silhouette lift a less expensive option?

The cost of a facelift will depend on how extensive the procedure is. A partial facelift can start at around $3000. The average cost, according to the American Society of Plastic Surgeons is about $7500. More extensive cases can run up to $15,000. The “no-knife lift” is priced by the number of sutures used, and therefore far less costly than facelift procedures.

Is the Silhouette Lift the same thing as a thread facelift?

The Silhouette Lift is technically considered a thread facelift since it is performed with a suture thread. However, this should not be confused with another procedure called the Thread Lift which is performed with barbed sutures which are not absorbable and can migrate, break and incur pain. The barbs may also cause skin irritations and complications, requiring corrective procedures. Because of these issues, the Contour Thread Lift has been banned in the United States.

How long do the results of the Silhouette Lift last?

Results tend to last about eighteen months as the sutures and cones are absorbed by the body.

How long does downtime last after a Silhouette Lift?

Patients can resume their normal activities right after their procedure. But they will experience swelling that will last two to four days. Many patients schedule their appointment on a Friday so that they can heal from the swelling over the weekend and be able to return to work on Monday without obvious signs of surgery.

When is it best to treat deep laugh lines with fillers versus getting a nonsurgical thread facelift?

Mild to moderate laugh lines can be improved with fillers which simply lift the groove.  But when the nasolabial fold becomes deep enough to create a fold or overlap, a Silhouette Lift can tighten and correct this issue.

Does a Silhouette Lift require any follow-up sessions?

The Silhouette Lift is done in a single session and does not require follow up procedures.

Can the Silhouette lift be performed on men as well as women?

Yes, the Silhouette Facelift is appropriate for men as well as women.

Still have questions about the Silhouette Facelift or other nonsurgical skin tightening procedures? Use the button below to Ask Dr. U:

Which Filler is Right For You? Dr.U Discusses the Different Types of Dermal Fillers and Their Applications
July 19, 2019