Dysport By Dr. U to Treat Frown Lines Between Brows

This patient wanted to get rid of the furrow lines between her eyebrows, feeling that this distinctive forehead wrinkle was quite prominent. When looking at Botox versus Dysport to treat frown lines between brows, she opted for Dysport. This injection is similar to and equally as effective as Botox; however, it is faster acting and less expensive.

When patients like this one present to Dr. Umar inquiring how to get rid of “11” lines on the forehead, Dysport is his standard of care. He also specializes in Botox for those who have a preference or in cases where Dysport might be less effective.

Patient Erases Frown Line Between the Brows With Dysport

Many individuals worry that frown lines between the eyebrows causes them to appear harsh or angry to others. This Los Angeles patient decided to tackle this …

Get Rid of Glabellar Lines Before Photos of Manhattan Beach, Los Angeles Patient

A primary challenge when using neuromuscular injections like Dysport is to get rid of glabellar lines in a way that looks natural and doesn’t leave the patient with a frozen expression. This patient in Manhattan Beach, Los Angeles desired a natural-looking approach to treat frown lines between her brows. She’d had Botox injected previously by a different provider, but decided to try Dysport at Dr. U Hair & Skin Clinic for the exact result she wanted. 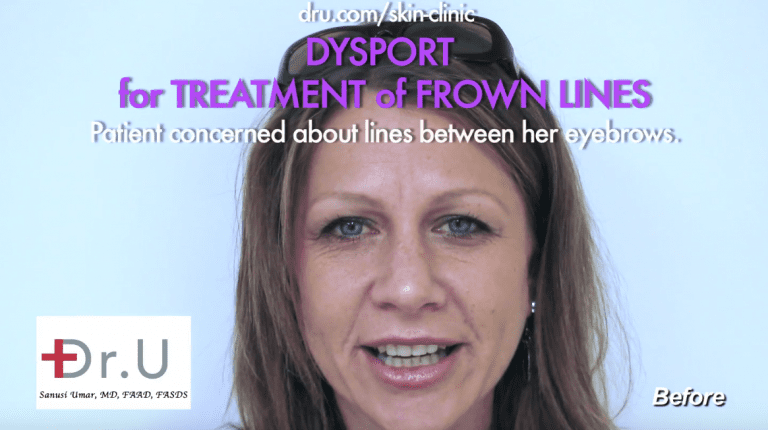 Get rid of furrow lines between eyebrows with Dysport at Dr. U Hair & Skin Clinic.*

Treating Frown Lines Between Brows With Dysport; Dr U Approach

Dr. Umar injected Dysport into the corrugator muscles of the patient’s forehead to get rid of her glabellar lines. At Dr. U Hair & Skin Clinic, Dr. U is widely experienced with using both Dysport and Botox as treatments for fine lines and anti-aging. Specifically, to treat frown lines between brows, his approach is subtle, yet effective, resulting in a natural-looking improvement.

When trying to get rid of furrow lines between eyebrows, it is important that the provider does not take an overzealous approach. This would leave the patient with a frozen, expressionless appearance. Such a result not only looks unnatural but denies the patient their facial animation and certain expression of their personality.

Dysport Forehead Before and After Results Photos:

When Dr. Umar asked the patient, “So, how do you like it?” Her response was two words: “LOVE it!” Looking at the injection of Dysport in the forehead before and after, it is apparent that Dr. U did indeed get rid of the glabellar lines completely. Most importantly, the patient still has an expressive appearance even after she opted to treat frown lines between the brows.

Dr. U’s skillful and subtle approach to cosmetic procedures is ideal for actors, public figures, and anyone who interfaces with clients or audiences. Screen or theater actors wondering how to get rid of “11” lines on the forehead must take a natural result into consideration first and foremost.

Prospective patients should also consider the treatment alternatives. When asked about Botox versus Dysport, this patient reported that Dysport yields faster results and is less expensive. Within four days Dysport was able to completely get rid of the furrow lines between her eyebrows. 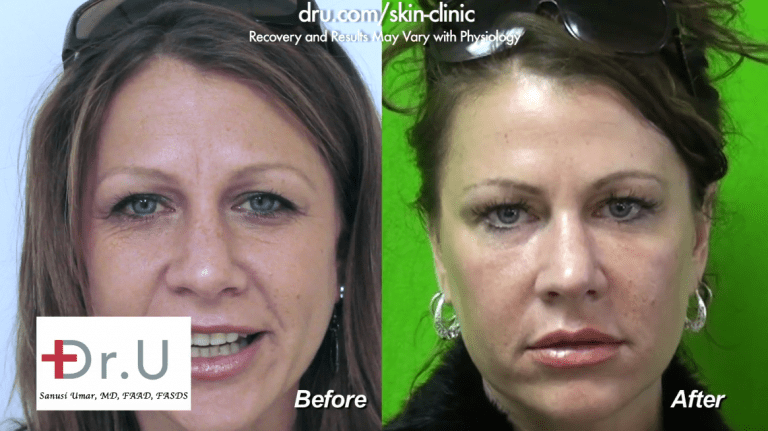 Dysport in forehead before and after proved highly effective and natural-looking for this Dr. U patient.*

Video: Botox versus Dysport to Get Rid of Furrow Lines Between Eyebrows

Watch this patient’s journey to get rid of her glabellar lines and achieve a smooth, beautiful forehead.

To speak to Dr. Umar about undergoing a Dysport treatment to get rid of frown lines between the eyebrows, schedule a complimentary consultation by clicking this button below:

I’m wondering how to get rid of “11” lines on the forehead naturally. Is there a way without using injections?

This depends on the depth of the wrinkles you want to get rid of. Due to the fact that these types of fine lines form from repeat muscle contraction over years, there isn’t an effective natural solution. These lines are often deep and stubborn, and will only subside by paralyzing the surrounding muscle. If you are quite young and you want to get rid of glabellar lines that are just beginning to form, you can attempt treatments like laser therapy to smooth the skin. A skilled practitioner like Dr. Umar would be able to apply the appropriate settings for your skin type to help you meet your goals. However, again, due to the natural action of the muscle, it is only a matter of time before the crease begins to deepen. Injections of Dysport are not only a great corrective measure, but can also help prevent this line from forming in the first place if administered early on.

When considering Botox versus Dysport for other facial areas, should I take the same factors into consideration?

Yes, choosing the type of injection and who administers it is paramount, whether you wish to treat frown lines between brows or crow’s feet around the eyes. You always want a smooth, yet natural result that does not appear overdone or frozen; the provider you choose will make or break this outcome. And, as discussed above, the choice of Botox versus Dysport really comes down to your priorities and which drug works best for you. In general, Botox remains the more widely used of the two, but Dysport may act quicker in certain patients.

How long does it last once I use Dysport to get rid of furrow lines between the eyebrows?

The results of both Dysport and Botox last anywhere from three to six months in most people. At this point, treatment will need to be readministered to continue the prevention of deep facial creases, or to reverse existing fine lines and wrinkles.

Tags: Botox versus DysportDysport forehead before and afterGet rid of furrow lines between eyebrowsGet rid of glabellar linesHow to get rid of 11 lines on foreheadTreat Frown Lines Between Brows

What is EMSCULPT? Why This Procedure Will Help You Crush Your 2020 Fitness Goals Fast
January 30, 2020