In this case, a patient from Santa Monica visited Dr. Umar asking for a procedure that would allow him to wear his hair short. Prior to seeing Dr U, he had a NW5 level area baldness with a strip scar surgery that left the patient still bald and a visible line of scar to boot. After Dr.UGraft hair transplant repair using head, and beard hair donors, Dr U achieved a successful repair of the strip scar and a good scalp coverage that enabled a crew cut by the patient. Although satisfied with the result, and given the patient’s desire to shave his head, Dr U suggested head tattooing by way of scalp micro pigmentation which the patient took. Dr U administered SMP using the trichopigmentation method sparingly to complement the patients already great Dr.UGraft hair transplant repair outcome. Using the combination of Dr.UGraft FUE plus SMP, Dr.U successfully concealed the strip scar and achieve the appearance of thicker density hair in the patient. The patient was able to carry a shaved head after hair transplant repair using Dr.UGraft FUE with insignificant showing of his hair transplant scar.

While the patient was happy with his results after Dru.UGraft FUE, SMP after the FUE using Dr.UGraft was the “icing on the cake” and allowed for a uniform, thick hair density and the confidence to rock a buzz cut.

Dr.UGraft FUE Plus SMP – Before Photos 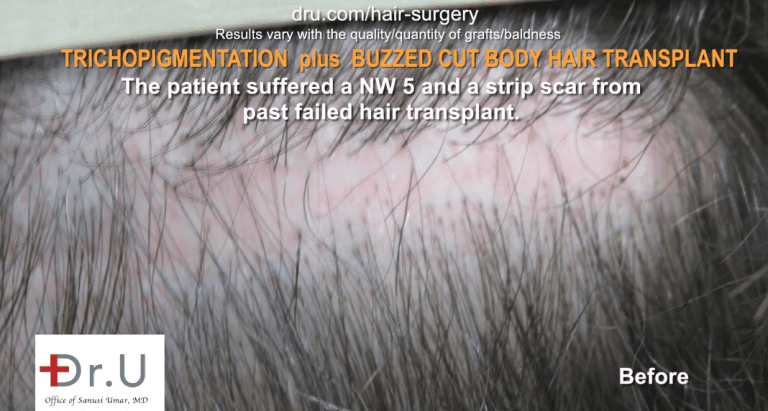 The patient suffered a NW 5 and a strip scar from a past failed hair transplant.

This Santa Monica LA patient was a 5 on the Norwood Scale. Before visiting Dr. Umar, he had previously had a strip hair transplant and now had an unsightly scar on the back of his scalp and unresolved and unremitting baldness. After a successful Dr.UGraft repair work, the patient wanted to complement his result by having both Dr.UGraft FUE transplant and SMP to both restore hair density and conceal the strip scar on his scalp. 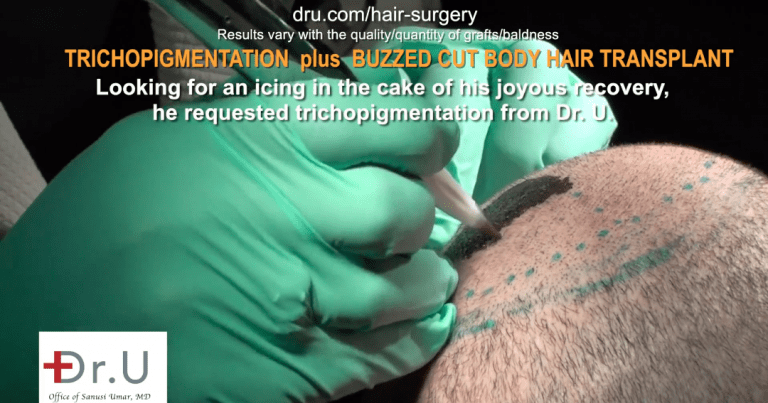 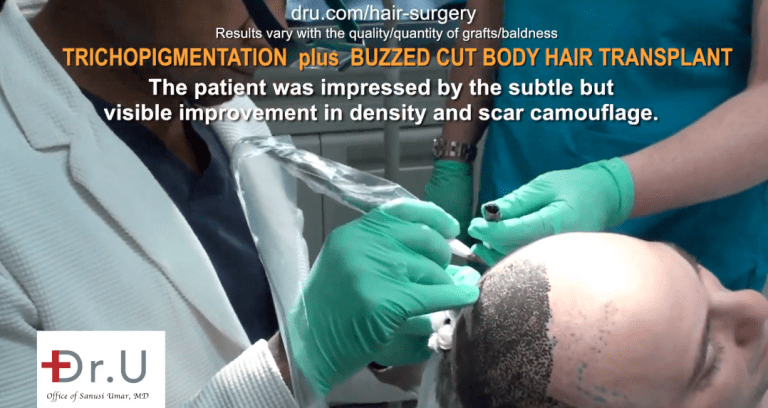 Because the patient was head donor depleted from a previous procedure, Dr. Umar used 6000+ hair follicles from the beard area to perform the FUE procedure. With advanced FUE hair grafting, Dr. Umar was able to vastly improve the appearance of the patient’s strip scar. Looking for icing on the cake, the patient requested SMP to complement the look of his new hair.

Dr.UGraft™ FUE Plus SMP In A Santa Monica LA Patient: Before and After Results Photos

As seen in the results below, Dr. Umar was able to achieve fantastic results by using a combination of FUE and SMP to repair this patient’s previous strip surgery scar. The combo of both procedures was needed due to the crew cut hair style that the patient desired to have. 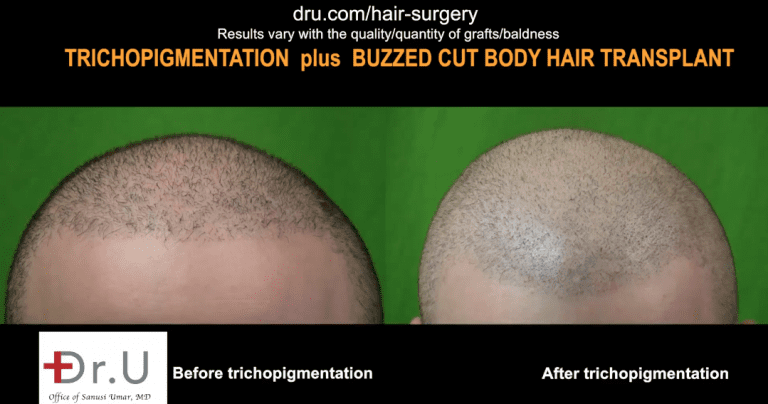 Results from before and after the trichopigmentation from Dr U. 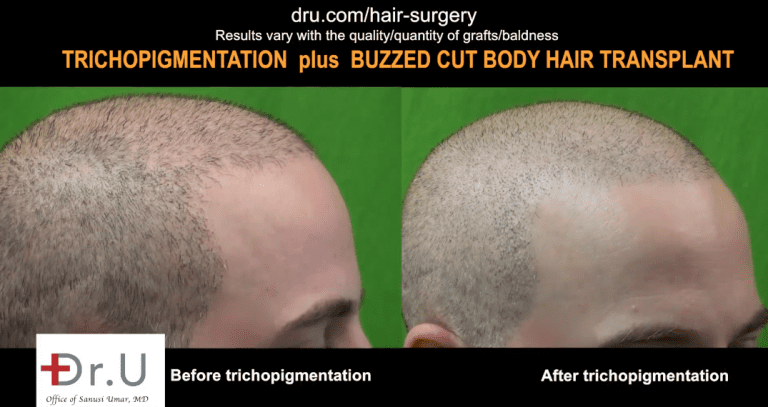 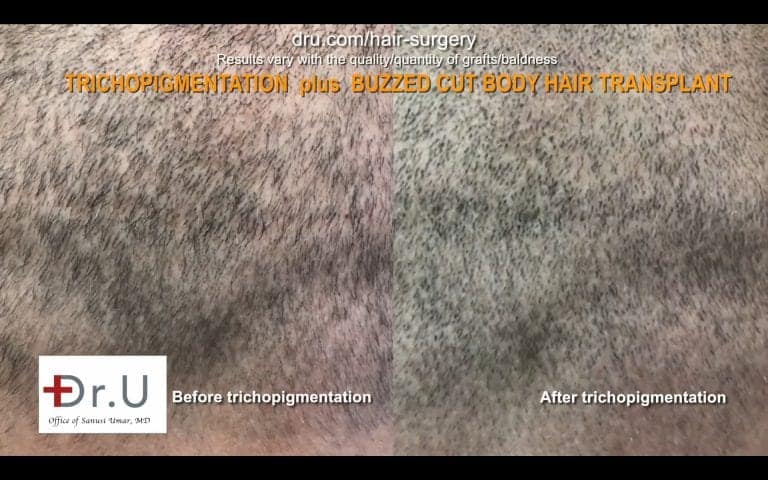 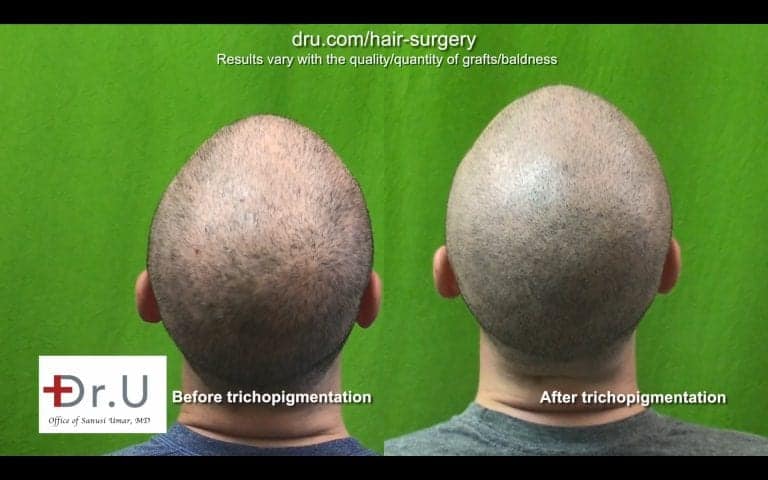 Get rid of hair transplant scar with Dr.UGraft FUE and SMP combination.* 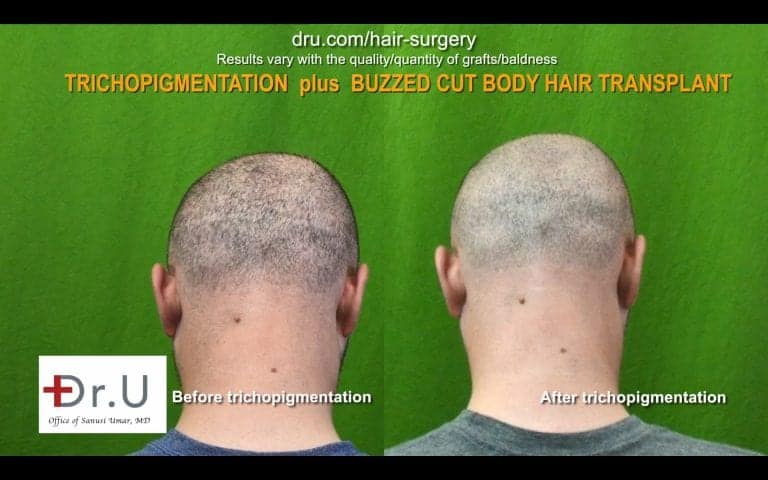 The patient was impressed by the subtle but visible improvement to both his hair density and scar. The results are completely realistic, so much so that close friends and family could not tell that he had SMP done. SMP especially helped to blend the FUE transplants in with the patient’s hair and improved density in his crown. His ability to shave his head after DrUGraft FUE and SMP is a clear evidence of what a successful hair transplant scar cover up looks like.

For more information, watch the below video of the patient’s story and his astounding results.

Only the unique combination of the Dr.UGraft FUE plus SMP could have achieved the density, uniformity, and scar concealment that the patient desired. Curious how Dr. Umar can help you achieve your hair restoration goals? Schedule a free consultation now!

Will SMP affect hair transplant success in the future?

In short, no. SMP is simply pigment deposited into the scalp to mimic the appearance of hair stubble. The body hair transplant and SMP combo will not affect your existing hair, and should not prevent a successful hair transplant in the future.

Is a body hair transplant and SMP combo a good idea for severe baldness?

Yes! The combination of SMP and a body hair transplant can achieve better results than a scalp micropigmentation alone. The success story in the patient presented in the above case is a good illustration of this.

What is the best treatment for a linear hair transplant surgery scar ?

To determine the best treatment, one should understand the factors that contribute to making a linear hair transplant surgery scar (also called strip surgery or FUSS scar) visible. Two factors cause the strip scar to be visible:

If after adding hair to the grafts, the hair transplant scar remains visible and there is a need for more improvement, the next thing to correct would be the color contrast issue. This is a 2 dimensional phenomenon and is best treated by adding scalp micropigmentation – SMP which is also a 2 dimensional in its effect. The combination of hair grafts and smp makes for the most optimal linear hair transplant scar cover up method currently available. This was the approach adopted in the patient presented in this article.

Dr. U has helped even the most severely scarred patients find the relief they crave. To ask any questions you may have about hair restoration, you can submit them using the button below: