Since catapulting to stardom as a VIP on Manchester United, the world has been obsessed with David Beckham. This obsession spread from soccer fans to the mainstream media, as popular figures took notice of the star player – particularly his daring, iconic hair styles. Indeed, in the late 90s to the early 2000s, virtually every tabloid covered each David Beckham hair cut to the minute detail. Now, as the athlete continues to age gracefully, many men are searching “how to style your hair like David Beckham”. 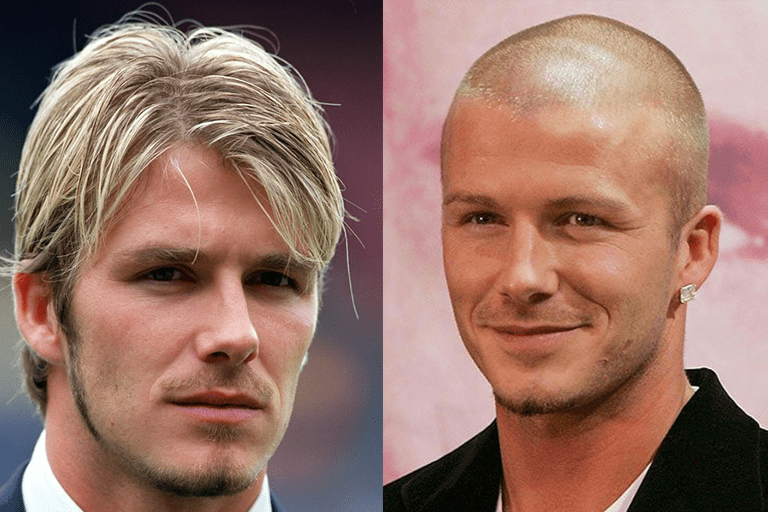 Even in the earlier days of his career, a David Beckham hair cut was a news-worthy story. In the 90s (left) he sported a shaggy, draped look, while in 2000 (right) he switched to a zero guard shave.

While he experimented with a few different looks early in his career, Beckham has, for the most part, been a consistent style icon. This is due in large part to the confidence with which he wears each cut – no matter how absurd (see: the braid fiasco of the early 2000s). However, Beckham is also a great example for how to style your hair according to the hair that you have. It’s no secret that a majority of men experience some form of hair loss in their life. 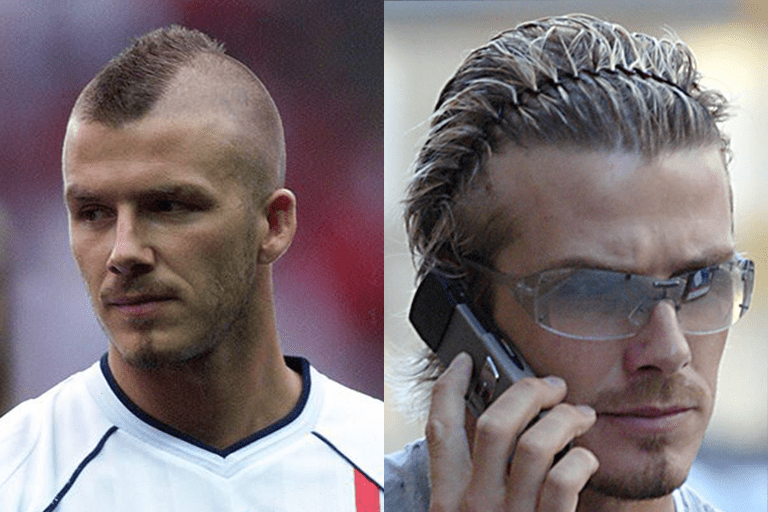 In 2001 (left) Beckham left his weekly zero guard shaving schedule and grew out a mohawk. In 2002, he grew out his hair even more to style a half-up do with braids, showing off his hairline. Even then, many men wondered how to style your hair like David Beckham. 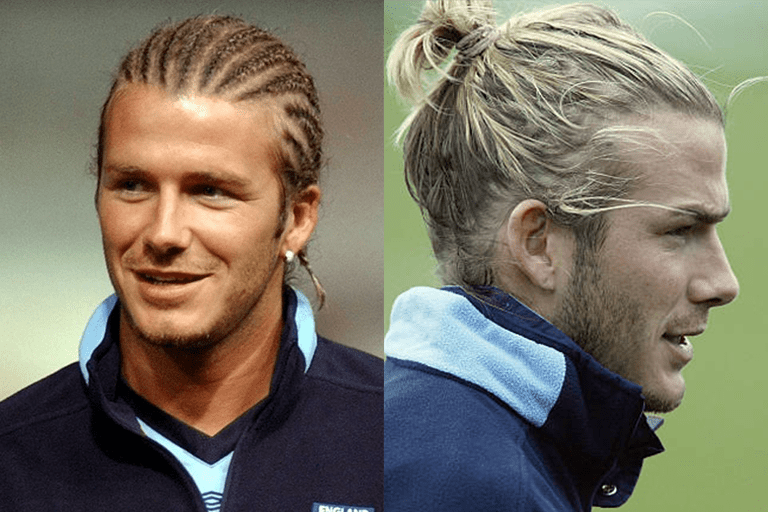 Wondering how to style your hair like David Beckham? According to these photos, the first step is growing it out. In 2003 (left) Beckham went all-out with the braids, sport his most unique look: the cornrows. A year later (right) he seemed to outgrow this experiment in favor of leading the charge on man buns.

Many men, upon realizing that they are thinning on the top of their head, grow out the hair on the back and sides of their head. This can actually emphasize the signs of hair loss on the front scalp. Instead, as Beckham demonstrates with his classic short hairstyle, all it takes is some subtle alterations to create the illusion of a youthful head of hair. This is done by shaving the back and sides closer to the scalp, to create the appearance of density on top. 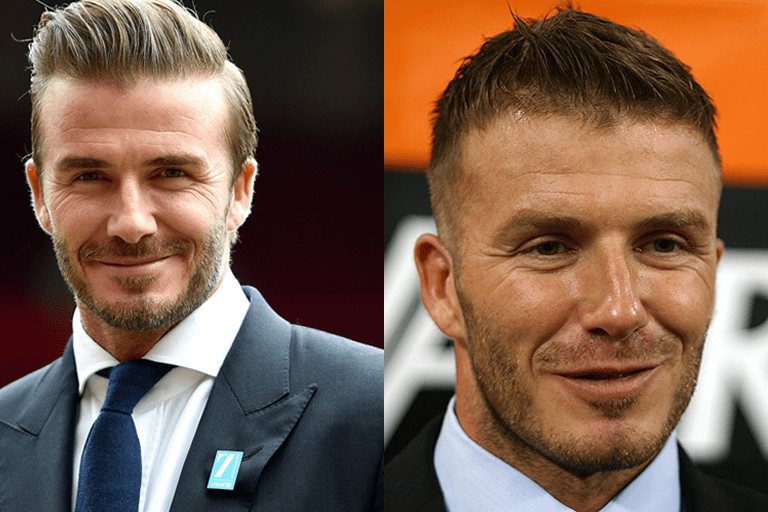 David Beckham new hair 2018 photos show that the star has found a look that works for him. Working with a shorter length on the back and sides while leaving the top a bit longer helps to combat the appearance of thinning. Men’s hair stylists often report being asked “how to style your hair like David Beckham” several times a week.

If your hair loss has progressed such that a change in hairstyle would not be sufficient to disguise it, you may be tempted to use a hair thickening product. Such products are typically powder-based and intended to coat the scalp to disguise the spaces between hair follicles. In fact, when David Beckham attended a reception in the Buckingham Palace in August, the images released prompted many to look for a David Beckham hair product to similarly disguise thinning. However, these thickening powders tend to look unnatural due to difficulty in matching the color your hair, as well as the texture of the product on the scalp itself. Beckham’s hairline, on the other hand, appeared naturally straighter than usual, according to several sources. So what could explain this change? 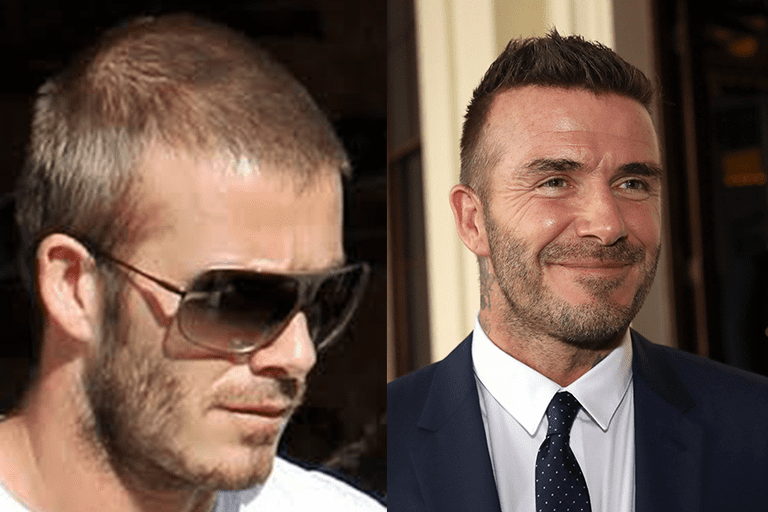 The photo on the left appears to show signs of thinning along the top of the head. A recent photo of Beckham (right) seems to show a straighter, more dense hairline, according to several sources. This has ignited speculation and searches around David Beckham hair transplant procedures.

The observed changes in David Beckham’s hairline, previously a mature “M” shape, seemed, by all accounts, to be a natural-looking shift to a more dense, straight shape. Considering the fact that flash from the many photographs taken did not show a shiny sheen to the scalp, and the wind did not blow away any topically applied product, the hair is likely Beckham’s own. The most reliable way to go about this kind of long-term, natural-looking solution is via a follicular unit excision (FUE) hair transplant.

FUE hair transplant is a procedure where an experienced hair surgeon extracts hair from a donor area (an area where hair follicles are unaffected by hair loss) and then grafts them onto the balding or thinning areas. Thanks to advancements in hair transplant technology, such as the Dr.UGraft System, the donor area is not only limited to the conventional area on the back of the head. Rather, the Intelligent Punch™ (Dr.UPunch i™) tool is able to safely harvest donor hair from virtually all body and head hair locations. This expands the donor supply to unprecedented heights, giving men facing severe hair loss hope for restoration.

The man in the video below noticed his hair loss early on and wanted to restore his youthful hairline. Several failed hair transplants later, he was left with continued baldness, with the addition of scars from previous follicular unit strip surgery (FUSS) scars. This left his donor area depleted, with no hope of restoration using traditional approaches. Taking a leap of faith, he approached globally recognized Los Angeles hair surgeon Dr. Sanusi Umar for a repair. Dr. Umar used the Dr.UGraft System to extract hair from the beard and body donor areas, allowing the patient to once again style his hair how he pleases with renewed confidence.

Watch this patient's updated video to see how his results not only withstood the test of time, but improved.
Updated Dr.UGraft™ Strip Scar Hair Transplant Surgery Repair

To consult with Dr. Umar (aka Dr. U) for free online, use the button below.

Frequently Asked Questions – How to Style your Hair Like David Beckham

What hair product does David Beckham use to make his hair look thicker?

It is unclear what David Beckham hair product is in use, if any, in recent photos. There are several shampoos and conditioners which have the effect of swelling hair shafts such that hair temporarily appears thicker. However, this is a temporary measure and does not halt the progression of hair loss.

What is the best way to style your hair like David Beckham if you have a receding hairline?

How to style your hair like David Beckham if you have a receding hairline: find a picture of one of Beckham’s shorter hairstyles and ask your barber to replicate the look. Longer hairstyles are often pushed back, showing off the forehead and hairline. Short hairstyles, on the other hand, can make the most of visual tricks to create the illusion of a fuller head of hair.

Will FUE hair transplant leave scars that can be seen with a short hairstyle?

All surgeries will leave scars; FUE hair transplant is a linear-scar free surgery, unlike FUSS, and leaves small, round scars were the tiny punch extracts each follicular unit. The unique shape of the Intelligent Punch™ (Dr.UPunch i™) encourages wounds to heal smaller and flatter. This typically allows patients to enjoy their favorite clipped hairstyle without worrying about visible scars.

Won’t body hair be noticeable on the scalp when trying to get a David Beckham hair transplant?

Body hair tends to be finer in caliber than the hair found on the back of the head. This means that it is typically a good match for creating a soft, natural-looking hairline. An experienced hair transplant doctor, such as Dr. U, can spread the distribution of body hair grafts in order to create an overall seamless look.

Have more questions? Ask Dr. U using the button below:

Learn how to find the best hair transplant doctor near you.

FUE Hair Transplant: The Truth About FUE Punch Size, Why Does It Matter?
December 2, 2018

VIDEO: What is an FUE Hair Punch? A Simple Guide to Understanding Types of FUE Hair Transplant Punches
October 17, 2018

How to Fix Hair Transplant Scars Without Making it Obvious
September 26, 2018