Keloid Removal Services Los Angeles: A keloid, also known as keloid disorder or keloid skin, is a raised scar made up of specific types of collagen. Depending on its maturity, it will be made up of type III or type I collagen. Keloids come in a variety of shapes, sizes, and textures, such as:

Causes for Keloids and Symptoms

Following a cut or wound on the skin, keloids develop within the scar tissue. As the body attempts to repair the wound, the collagen overgrows, sometimes producing a large lump. Type III collagen, also known as granulation tissue, occurs in the earlier keloids, while type I occurs in the later forms. Piercings, severe acne, chickenpox scarring, infections, burns, vaccinations, repeated trauma to the skin or tension during wound closure can also be known to cause them; something as simple as a pimple, insect bite or scratch can, too. In terms of locations on the body, the most common areas include the chest, back, shoulders, earlobes, arms, pelvic region and the collarbone. The general theme is a predilection for areas of the body where the skin is under tension (stretched as in e.g. chest, collar bones) or pulling effect of gravity (e.g. an earlobe that is pulled down by a heavy earring after piercing). Although an injury is usually responsible for this type of scarring, keloids can occur spontaneously. They are also prone to growth, especially if they first appear at a younger age.

Keloid scars tend to have a genetic component, although no single gene has yet been identified. Keloids occur at a higher rate in those with darker skin, showing up most frequently in Africans and African Americans’ family history. They appear in 15 – 20% of individuals with African, Asian or Latino heritage and significantly less for those with a Caucasian background; there are no reported cases in patients with albinism. This type of scarring is also common in young people between the ages of 10 and 20. While keloids show up in both sexes, they occur at a higher rate in young females than in young males. This may be due to the higher frequency of earlobe piercings in young girls.

What are the symptoms of keloids on the ear?

The symptoms of keloids can include:

Can Keloids Be Removed?

As a result of keloids being unsightly and in certain cases, uncomfortable, keloid removal services are available. While keloids are not dangerous or contagious, they can cause physical discomfort such as sharp pains, itching and changes in texture; the degree in which these symptoms occur will vary from person to person. However, if they become infected, ulceration can occur. Due to these reasons, people seek out keloid removal services.

If you are interested in keloid removal and have a question that might help you clarify further, do not hesitate to Ask Dr. U at no cost.

How To Remove Keloids

After developing a keloid scar, patients often wonder how keloids are removed. The method of treatment for keloid removal will vary from case to case and often depends on the patient’s age. Options include excision, pulsed dye laser treatment, corticosteroids, and antimetabolite injections (e.g. bleomycin) cryotherapy and Grenz zone radiation therapy, and pressure devices. However, radiotherapy, anti-metabolites and corticoids are not recommended for children due to potential side effects. When it comes to keloid removal, more severe consequences may ensue. The likelihood of the resulting surgery scar has more than a 50% chance of becoming a keloid.

Surgical excision is the most common way to perform keloid removal. This surgery closes the keloid scar by using the keloid itself to form a flap. In his Los Angeles Clinic, Dr. U uses this method as a way to lower the need for indefinite steroid injections or maintained use. It also helps prevent further scarring and has a lower rate of the keloid returning. Other methods include:

Depending on each patient’s situation, more than one treatment method for keloid removal may be used. The size and location of the keloid will also be a main deciding factor. Patients are usually back to work in 1-2 days following keloid removal services; the stitches are removed in a few days.

>Due to a piercing, this Los Angeles patient shown below was left with a Keloid on her earlobe. After using steroid injections with no success, she turned to Dr. Umar for help. Following the procedure, she was very happy with the earlobe keloid removal procedure.

Dr. U removed the keloid from the earlobe and then used a keloid-flap to close the scar. The flap prevents the scar-forming-signal the wound requires to form a scar. Often, keloids will end up growing back after surgery. However, this was not the case here.

Typically keloids would grow back sometimes even bigger after conventional surgery. In this case, it did not recur. The pictures below show results at one year after keloid removal. The results reveal a keloid free earlobe, without the need for steroid injections. Thanks to Dr. U’s unconventional treatment, the results are impressive. The patient is left with an aesthetically pleasing earlobe and fast recovery time.

Before Photo of Earlobe Keloid Removal 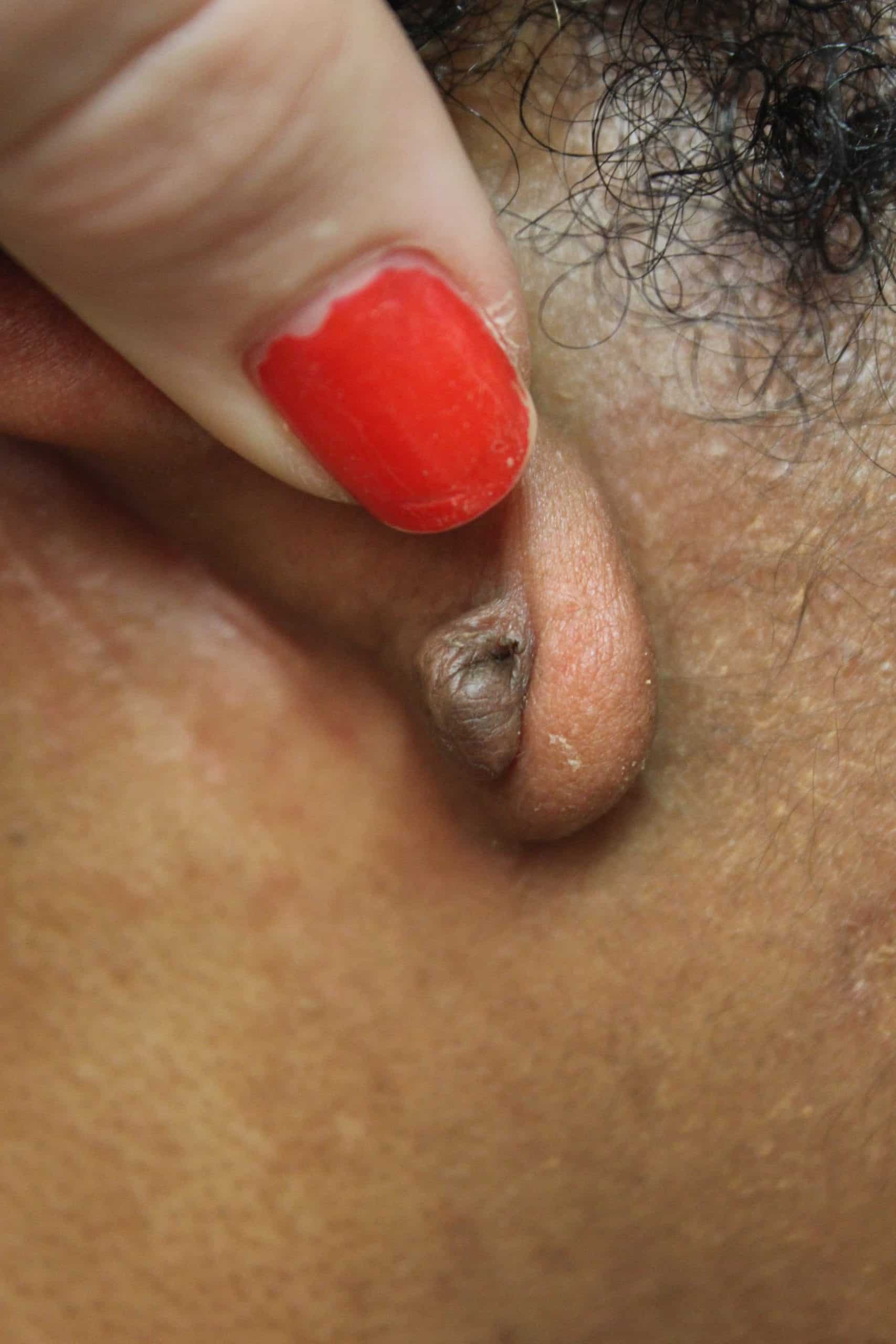 Before photo of a Los Angeles patient prior to receiving earlobe keloid removal services. 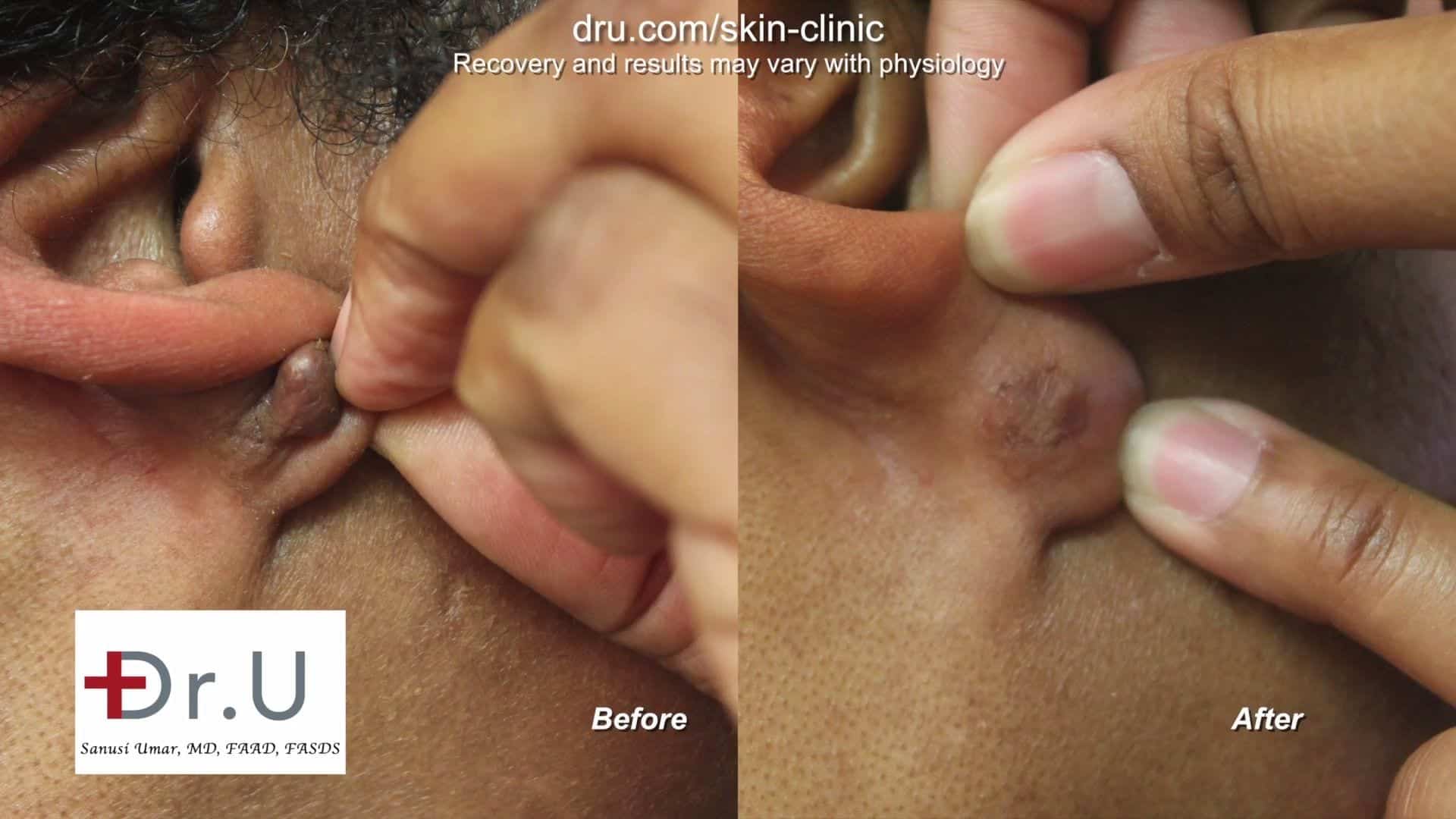 After photo of a Los Angeles patient who is left keloid free after Dr. U’s flap keloid removal treatment.*

After receiving earlobe keloid removal treatment, this Los Angeles patient is left with a keloid free earlobe a year after the surgery.

The Office of Dr. U provides patients with a comfortable experience to those interested in keloid removal services. To get started, fill out our consultation form or call us at 1800-499-DRUCLINIC (3782) to schedule an appointment.

Who is a good candidate for keloid removal services?

Any physically healthy person who wants to remove their keloid could be an ideal candidate.

What can I expect in terms of keloid removal cost?

The total cost varies, depending on the size of the keloid, the location of the scar, the area of the clinic, the doctor and the method used. The average cost of keloid removal anywhere from $350 to $2,500.

What makes keloids form after surgery or injury?

The answer to this question is still not fully clear. However, keloids are more prevalent in people with darker skin tones– such as individuals of African or Asian descent. A genetic predisposition amongst individuals of these ethnicities seems to be the reason for this.

Which procedure does Dr. U think should be used to get rid of my keloid?

Dr. U is an expert in Keloid removal, offering individualized treatment plans to ensure success. Following a private consultation with him, he will be able to determine the best method of removal for you.

Will my insurance pay for my keloid removal procedure?

Unfortunately, insurance does not cover cosmetic procedures unless there is some medically necessary component. If your Keloid is inhibiting normal function, you may be in luck.

Have more questions about keloid removal services? Ask Dr. U using the button below.

Learn more about the cost of procedure and financing options.