The Malibu Patient chooses Belotero vs Botox for vertical frown lines: This Malibu patient was dissatisfied with the 11s that suddenly crept across her forehead and in between her eyes. Lines that form in between the eyes — caused by the constant creasing of the frontalis muscles, usually brought on by worry or stress, are popularly referred to as 11s (or elevens) due to the shape of the lines. The forehead lines are often shaped like the number eleven, hence the moniker. The Malibu patient wanted to hide these lines in between her eyes, as well as another larger line that had formed on the side by her forehead. She did not want to use Botox for personal reasons, so she approached Dr. Umar for an alternative to Botox. In their initial consultation, Dr. Umar recommended the dermal filler Belotero vs Botox. Belotero is a dermal filler which comes in different strengths.

Botox and Dysport are common recommendations for addressing vertical frown lines between the eyebrows. But some patients prefer other options. The woman in t…

Hide Frown Lines Between The Eyes – Before Photos:

The Malibu patient visited Dr. U at his clinic in Los Angeles where he decided to go with a Belotero injection treatment. Unlike Juvederm and Restylane (both hyaluronic acids used to treat frown lines), Belotero could be injected just below the skin’s surface, preventing the bluish discoloration commonly known as Tyndall effect. 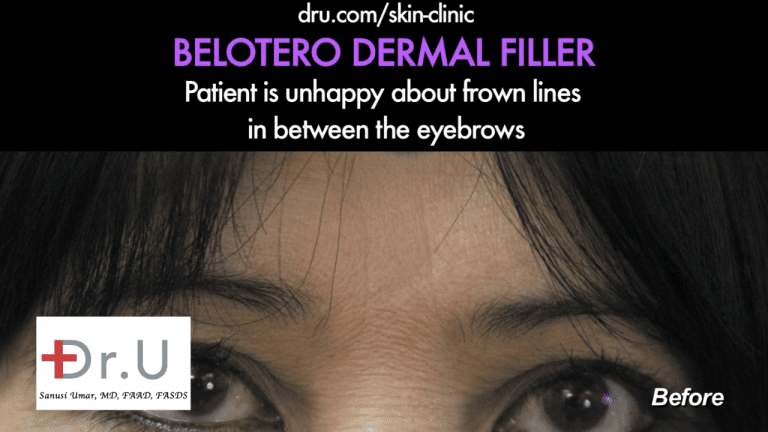 Malibu patient with 11’s and superficial line on the side of her face. Dr. U recommended Belotero vs Botox for her treatment.*

Dermal fillers can combat facial lines by restoring facial volume, which naturally decreases with age. The decreased in facial volume can emphasize the appearance of fine lines. Belotero is a dermal filler which comes in three different types, (soft, basic, and intense) that differ based on the concentration of the hyaluronic acid and the needle’s width used for the injection. Belotero Soft has a lower concentration of Hyaluronic acid which makes it ideal for dealing with fine wrinkles and lines like crows feet, without having to risk of discoloration of the skin.

When considering Belotero vs Botox for fine lines, it can be helpful to research the pros and cons of each treatment.

Belotero is a thin hyaluronic acid filler weighing less than many others. It is made by a process known as Cohesive Polydensified Matrix, a proprietary technology. As a result, the final injection solution is given a relatively high degree of elasticity. So once injected, it is distributed more evenly, going seamlessly in between treated and untreated areas. Other hyaluronic acid fillers can potentially raise the dermal layer, forming clusters under the skin. Dr. Umar thus expertly injected Belotero to help this patient get rid of frown lines between eyes.

Belotero can also be a great choice to remove crows feet lines. 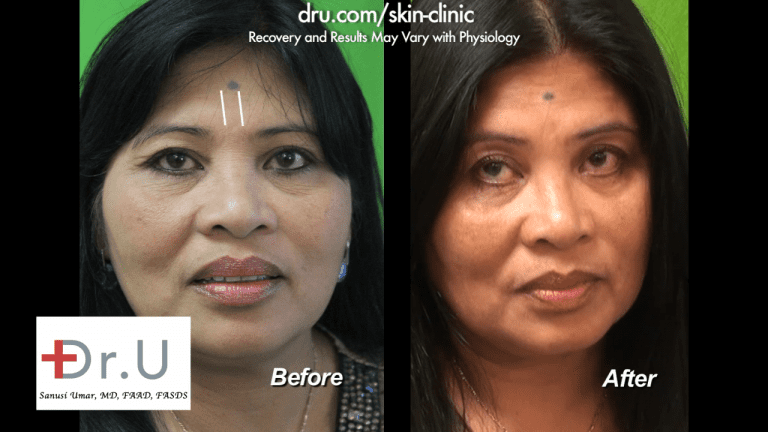 After a week she the Malibu patient had noticed a difference, and after three weeks the lines between her eyes and on the side of her forehead were successfully treated. The patient was extremely happy and would definitely have the treatment done again. 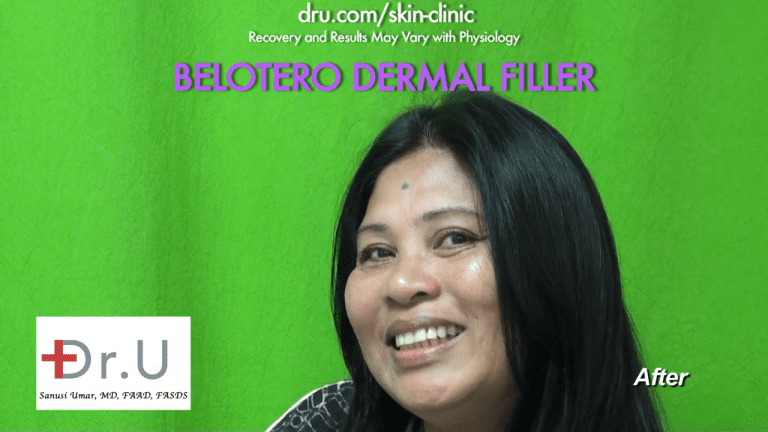 Watch the video below of the Malibu patient’s treatment for lines in between the eyes. She explains how she is overjoyed with the results and says she would gladly do the treatment again in the future.

This Malibu patient wanted to get rid of pesky frown lines between eyes, but didn't want to use Botox. Dr. Umar recommended the dermal filler Belotero vs Botox instead.
Malibu Patient Chooses Belotero vs Botox

If you would like to consult Dr. Umar about treating vertical frown lines between eyes, use the button below to get started:

What is the best frown lines between eyes cream?

Generally, creams for frown lines fo not produce long-term results. This goes for moisturizers as well — they can create the temporary appearance of plumpness, which may reduce the appearance of wrinkles temporarily. They may also produce a slick sheen filling in pores and fine lines. This sheen washes away with a rinse, however. The use of topical products become increasingly ineffective as the lines become deeper with age. The only way to get rid of frown lines between the eyes in a long-term manner is to address underlying issues that reside in deeper layers of the skin. This can be achieved with non-surgical procedures such as dermal filler injections, which restore facial volume, or with neurotoxins such as Botox, which effectively stops the muscle contraction which causes the line.

How does a doctor determine using Belotero vs Botox?

Dr. U goes case by case, treating each patient uniquely, based on the best course of action to fit their desired result and financial situation at the time. In this case, Dr. U determined Belotero was a good choice for the patient due to the superficial nature of the facial lines, and her preference to not use Botox.

How can I hide frown lines between eyes without Botox?

A Belotero treatment would be a good alternative to Botox. Juvederm and Restylane are also alternatives to Botox but may leave the patient susceptible to the Tyndall effect– a bluish discoloration.

Have more questions for Dr. Umar about using a filler for frown lines between eyes? Submit your inquiry using this button:

See why this patient chose Belotero over Juvederm for her single fine line.

Learn how Dysport can be used to treat a frown line between the eyebrows.

What is EMSCULPT? Why This Procedure Will Help You Crush Your 2020 Fitness Goals Fast
January 30, 2020
Search Site
Recent Posts
Recent Comments
Categories