This Manhattan Beach Los Angeles patient of Dr. U was concerned about the worsening signs of redness on his chest due to Rosacea,  a chronic, progressive inflammatory skin condition. It typically occurs on the face and neck due to abnormalities in the tiny blood vessels close to the skin which result in persistent redness. Incidences on the chest do occur, as in this particular case. But they are far less common. Nonetheless, through Dr.U’s laser treatment for Rosacea, the patient was able to permanently clear away the redness and prevent the onset of more severe symptoms.

Also known as the vascular laser, the Vbeam system has been designed as a highly specialized technology for treating skin conditions like Rosacea, Poikiloderma, and others which are caused by the abnormal proliferation or dilation of small surface blood vessels. As a pulsed dye laser, it administers short bursts of energy wavelengths (585-595nm) which are absorbed by the hemoglobin in red blood cells which serve as precise points of entry into the blood vessels.  Once this is achieved, the heat proceeds to destroy the walls. The non-functional tissue left behind is then broken down by the immune system and carried away.

When left untreated, Rosacea may evolve into other severe symptoms such as the thickening of the skin and the formation of pustules, often depending on the location of the condition.

No More Chest Rosacea or Redness After VBeam Treatment

This male patient noticed that his chest was getting progressively redder. His condition was caused by Rosacea. Dr. U recommended treatment with the VBeam la…

Photos of Manhattan Beach, Los Angeles  Patient Before His Laser Treatment for Rosacea By Dr. U

This young man noticed that the redness on his chest was not going away, but instead, becoming increasingly more noticeable over time. He was diagnosed by Dr. U as having atypical chest Rosacea.

Here are photos of his chest redness prior to his laser treatment. 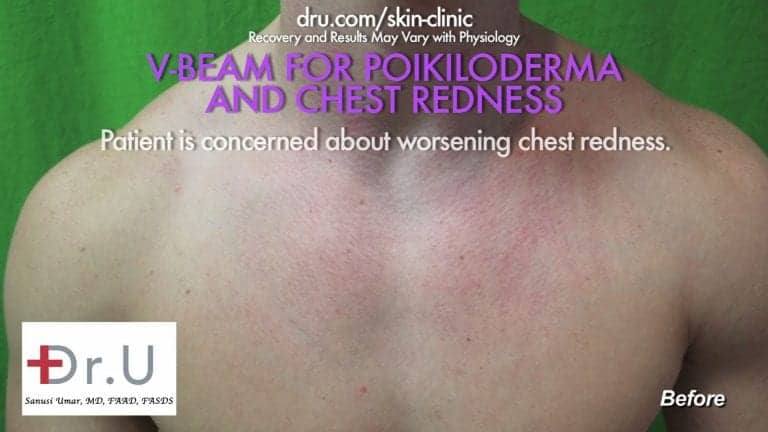 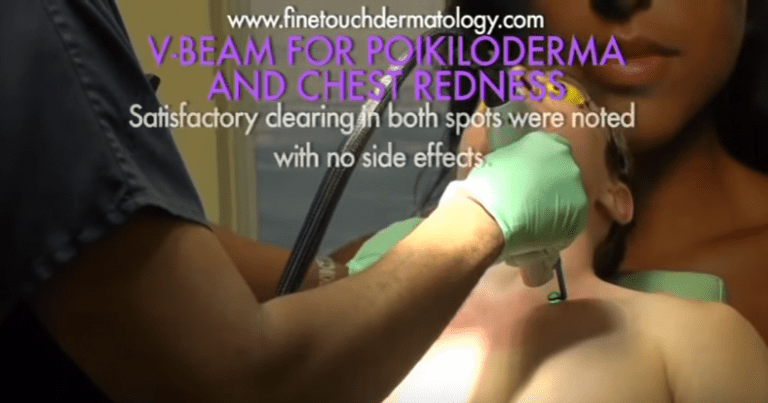 Dr.U tests for clearing of redness and the possibility of side effects of Rosacea laser treatment with the Vbeam

Before proceeding with a full laser treatment, Dr.U performed a preliminary test to apply the laser at different settings to two small areas of the patient’s chest.

The satisfactory clearing results and the absence of adverse effects confirmed that the Vbeam laser would be able to serve as an ideal Rosacea treatment for this case.

he Vbeam laser offers an efficient means to achieve complete resolution of symptoms without the associated risks of dangerous health side effects.

In three sessions, Dr.U treated the entire affected area on the chest to efficiently eradicate the blood vessels responsible for the unwanted redness, once and for all.

Before and After Dr.U’s  Vbeam Laser Treatment For Rosacea

Here are side by side comparisons showing the patient’s chest, prior to and following his Vbeam laser treatment.

Before and after photos after patient’s first treatment with the Vbeam laser treatment for Roseaca.

Not only did this restore the normal coloration of the skin, without lines of demarcation, but also prevented the progression of the Rosacea into more advanced stages. 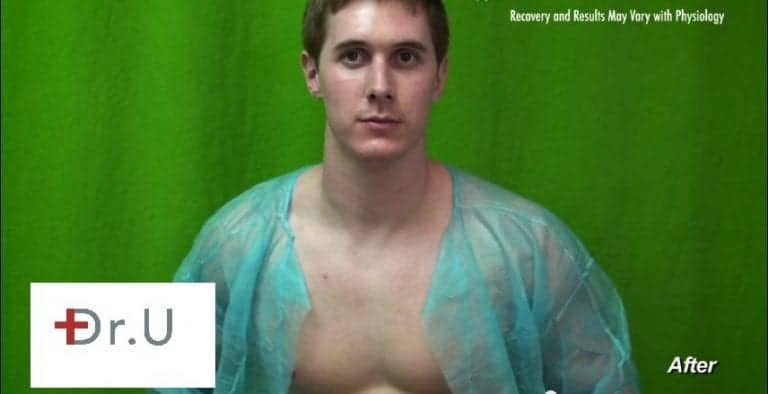 This patient was thrilled about the effective resolution of his chest Rosacea thanks to the help of Dr. U’s  Vbeam laser treatment. His results became shortly apparent within 3-4 days following his last session.

In the video, he says, “It [Vbeam] did a very good job of what it was supposed to do which was to get rid of the redness…Some doctors don’t have the V-beam, so they prefer IPL, but the Vbeam is definitely the best choice.”

If you are in the greater Los Angeles area and would like to undergo treatment for Rosacea or related vascular skin issues, submit your photos and details of your condition through a complimentary online consultation with Dr.U.

FAQ on Laser Treatment for Rosacea and Related Topics

Rosacea is primarily caused by genetics. This is evident by a  high proportion of individuals with Rosacea within the population of fair-skinned individuals born of  European descent.  Most patients are able to report relatives in the family who share this condition. A genetic predisposition can give rise to abnormalities in vascular behavior that give rise to Rosacea symptoms.

As an example, affected individuals are susceptible to skin flushing and flare up episodes caused by environmental triggers such as weather conditions or specific foods.

Medical experts have also observed that Rosacea patients tend to have higher numbers of specific bacteria and mites which may be contributing to their symptoms.  Evidence shows that these individuals have larger quantities of H. pylori bacteria in their gut which cause the body to produce a polypeptide that stimulates blood vessel dilation, known as bradykinin.

For unknown reasons,  they also have higher populations of a mite known as Demodex folliculorum. It is not clear if this results from having Rosacea, or if the mites themselves are causing the symptoms.

Is there such a thing as a good rosacea treatment over the counter?

At the moment, there are no effective over the counter Rosacea treatments that cure or eliminate the redness.  Products sold to consumers without a prescription can only provide temporary relief for symptoms, at best. They can help soothe skin dryness, redness, irritation, and swelling. Ultimately, they cannot eradicate the core issue of problematic blood vessels or the symptoms arising from more advanced stages of the condition.

Why does the Vbeam laser work for rosacea and as a poikiloderma treatment?

The Vbeam laser is specifically designed to get rid of small, problematic blood vessels. This makes it an ideal choice for treating conditions like Rosacea and Poikiloderma. Both cases are characterized by unwanted skin discoloration caused by vascular dilation and/or proliferation. The Vbeam laser can precisely pinpoint and clear away these blood vessels, allowing patients to restore their normal skin coloration.

What are the side effects of Rosacea laser treatment?

Common side effects of a Rosacea laser treatment may include some swelling, bruising, itching, redness and soreness right after the procedure. However, these issues usually heal and resolve within just a few days.

What is the cost of Rosacea laser treatment?

A Rosacea laser treatment may cost between $350-$600 per session. The number of sessions will depend on the extensiveness of each case. As with the example of the patient discussed above,  three sessions were needed. Skin specialists like Dr. U determine how much of the laser energy can safely be administered in a single session and allocate multiple treatments as needed to achieve clearance.

What is the recommended treatment for Rosacea bumps?

Rosacea bumps need to be addressed differently from skin flushing forms of the condition. The pimple-like manifestation of the condition can be treated with prescription medications such as topical Metrogel (metronidazole), anti-inflammatories sulfur-based creams, antibiotics (e.g. sulfacetamide, doxycycline)  and topical retinoids (e.g. Differin)

Other treatment options for the condition include the use of drugs such as topical Metrogel (metronidazole), anti-inflammatories, antibiotics, topical retinoids and glycolic acid peels.

Have more questions about laser treatment for rosacea? Ask Dr. U using this button:

Discover how Dr. U used the Vbeam laser  to treat severe acne for this Manhattan Beach teenager

Learn more about how to deal with red irritated skin

What is EMSCULPT? Why This Procedure Will Help You Crush Your 2020 Fitness Goals Fast
January 30, 2020
Search Site
Recent Posts
Recent Comments
Categories