Mole Removal Services Los Angeles: Are you in need of mole removal services? Look no further. Dr. U is happy to address all of your questions, concerns and treatment options. The reasons that people seek out mole removal vary from case to case. While some seek out mole removal services for aesthetic reasons, others need mole treatment due to skin care concerns. After a full body examination with Dr. U, each mole can be checked for skin cancer. Taking in warning signs such as asymmetry, border and color of the moles, Dr. U is able to spot out suspicious looking moles

What is a Mole?

A mole is a growth on your skin that is typically brown or black and can be found anywhere on your skin, by itself or in groups. The majority of moles will appear during early childhood and in the first 30 years of someone’s life. People tend to have anywhere between 10-40 moles by the time they’re an adult, which can be unsightly and include hair growing within. After the age of 40, any new mole should warrant close attention and evaluation by a certified dermatologist. Over time, a mole can slowly change, becoming raised and/or changing in color. In fact some moles may completely disappear over time, allowing the individual to avoid mole treatment.While moles have the potential to change, not all of them do.

There’s two things that may cause moles to form:

Moles form when melanocytes, a specialized kind of cell that produces melanin, grow in clusters with tissue surrounding them. These pigmented cells frequently appear as small, dark brown spots. Moles can form on area of the body, which means that mole removal services are used head to toe. They come in different shapes and sizes, and can be flat or raised, smooth or creased. While you may notice more and more moles popping up on different areas of your body with time, you can also experience the opposite- moles disappearing with age. While most moles are harmless, it is always a good idea to check with a doctor for pre-cancerous signs. If this is the case, mole removal services are available. 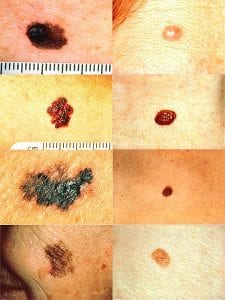 This photo displays a variety of moles that can be present on the body.

There are all kinds of moles categorized by their shape, color, and texture. Fortunately, mole treatment is able to address all of them.

According to the University of Maryland Medical Center, majority of moles are not cancerous. Examination is necessary in order to make sure that the mole is not cancerous.

The A B C D E criteria is often put in use in order to roughly analyze various characteristics of moles.

How To Remove a Mole

When it comes to mole removal services, there are three common techniques for eliminating nevi:

Mole removal services can be done by cutting the moles off at their base or by excising the skin around the mole. Making cuts under the mole usually means sutures aren’t necessary. However, cutting around the mole may require sutures after the procedure is done. Cutting a mole and suturing can leave a line of scars but cutting without suturing may leave a wider scar. After the mole has been removed it should be given histological analysis to determine the specific nature and checked for cancer cells.

With this type of mole removal treatment, liquid nitrogen is topically placed onto the skin. It then freezes the mole to get rid of the abnormal tissue. When the melanocyte cluster is deeply embedded inside the skin, needles or probes can be used to apply the nitrogen. Chances of color loss is increased with cryotherapy.

When receiving mole treatment by laser, certain laser wavelengths can be absorbed by the mole’s pigment. The energy of this wavelength is used to destroy the abnormal tissue. The laser then seals off blood vessels so that there is no bleeding after the procedure.

Laser mole removals are done only for benign lesions. It must not be done in malignant or cancerous lesions or lesions that are suspected to be cancerous or the potential for cancerous transformation. A mole that may have cancerous characteristics should be removed with surgery and submitted for pathologic analysis.

Before and After Photos of Mole Removal Services Los Angeles 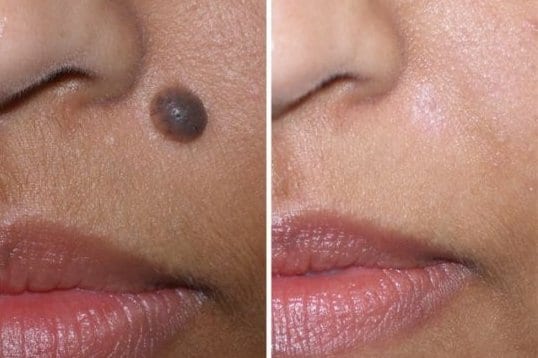 Before and after photo of a successful facial mole removal.*

Thanks to facial mole removal, this patient was able to achieve the cosmetic look she was after.

Before and after photo of a patient who removed stomach mole treatment.*

While this patient had a lot of moles covering her stomach, she was able to significantly reduce the amount thanks to skin mole treatment.

If you are interested in seeking mole removal services, you have come to the right place. After a consultation, Dr. U will provide a personalized treatment plan. Contact us by filling out the consultation form or call us at 1800-499-DRUCLINIC (3782) to schedule an appointment.

Medical evidence does not show that this form of mole treatment is effective. In addition, they are usually expensive and contain harsh chemicals.

Does getting a mole removed hurt?

Most patients say that mole treatment is not a painful process, as the doctor will numb the area prior to removal.

This can vary depending on the kind of mole removal treatment you have done. However, most treatments with Dr. U offer great cosmetic results.

Will I miss time from work after receiving mole treatment?

No. You can resume to your regular schedule immediately after mole treatment.

While it varies case to case, many insurances are willing to cover a portion of mole removal services.

How much does mole removal cost?

The average cost for mole removal ranges from $100 to $500 per mole and depends on a number of factors including shape, size and location on the body. Larger ones cost more to remove. Moles in highly visible areas must be removed more delicately, which results in a higher price.

As a world-renowned dematological surgeon, Dr. U has plenty of experience with mole removal – to ask him a question about your mole and the possibility of treatment, click the button below to access our Ask Dr. U online portal:

Read more about the best removal strategies for unwanted facial and body hair.