Shaved head danger Acne Keloidalis Nuchae ( AKN ) lurks around barber shops. One look at the NBA and it is easy to see that many athletes opt for no hair, but African American men may get more than style. In the same vein as an ingrown hair, Acne Keloidalis Nuchae causes hair follicles to become inflamed and develop bumpy lumps and scars. The most common aesthetic appearances of AKN are head bumps and pimples that can scar with time. The typical location of AKN is the nape areas of the scalp and neck, however, it can be widespread and affect the entire scalp surface in severe cases. 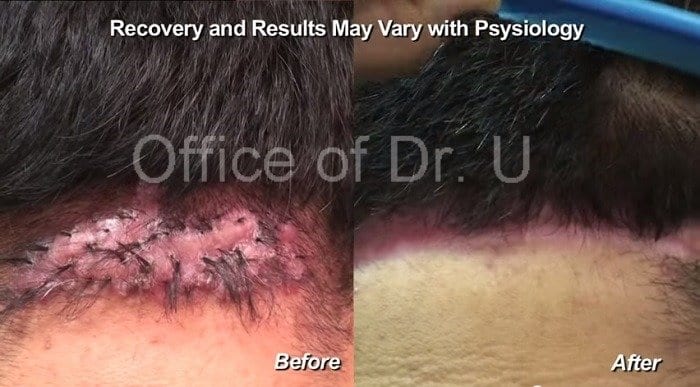 Bumps and keloids caused by hair regrowth need to be treated

Acne Keloidalis Nuchae is typically a problem for young African American men ages 13-25. Because of the tight curly nature of the hair for men of African descent, it is often kept very short. A common mistake is to call the pimples barber’s rash. While the exact cause of AKN is not known, it is not likely an infection. Dr. Umar believes that there is a hormonal basis for acne keloidalis nuchae rooted in the same hormonal interplay found in acne with testosterone. It is very rare for a woman to present with AKN and infrequently it affects other ethnic groups.

A common agreement on cause and effect is the close shave of the neck and nape of the head. Many experts believe the improper re-growth of the hair after close shaves cause folliculitis to develop. Symptoms of AKN are bumps, keloids, and pimples on the back of the head. The papules are inflammations of the hair follicles and if not treated, can grow into a large mass of tissue. There was some speculation that AKN or a scar might have made an appearance under the bandage on Ving Rhames’ neck in Pulp Fiction. What do you think?

So if you have your favorite barber or Barber’s shop, spread the word. As the Barber Shop movies (Barber Shop 3 The Next Cut) and an episode of ABC’s Blackish (Season 2, Episode 8 Chop Shop) illustrate, the barbershop is an integral part of the African American community. Your barber can keep an eye out for breakouts on your neck.

Short-term treatment of AKN includes medication. In more extreme cases, laser treatments or surgical intervention is the answer. Some of our patients have shared their experience of Dr. U Hair and Skin Clinics in this youtube playlist.

To learn more about the treatments available today for Acne Keloidalis Nuchae, please read this in-depth article at DrU.com.

The Role of Empathy for Better AKN Treatment Results and Better Ideation in General
July 26, 2019

The Bumps on Your Head May Be More Serious Than You Realize
February 14, 2018
Search Site
Recent Posts
Recent Comments
Categories