Surgical Removal of AKN Lump On Back of the Head by Dr. U Clinic

Successful surgical removal of an AKN lump often results in wide, thick scarring on the back of the head, if the surgery is even possible at all. For this reason, many physicians will not operate to make AKN razor bumps disappear. Instead, they will attempt non-surgical medical management as treatment for the razor skin bump, or mass on the back of the head. Non-surgical medical management of back of head AKN razor lumps commonly involves steroid injections and topical corticosteroids in this course of treatment, which in most cases are ineffective in completed eradicating the lesions. A surgical removal of AKN lump or bumps, however, is typically regarded as a curative treatment.  When this patient from Montreal found Dr. U Skin Clinic and learned Dr. Umar’s experience in this cosmetic niche, he became hopeful that there was a cure for him.  A surgical removal of his AKN lump in Dr. Umar’s expert care would turn out to be the relief he’d searched for.

Montreal, Canada Patient’s Surgical Removal of AKN Lump Called Razor Bumps On Back of The Head Before Photos:

This patient struggled with a wide bump growth on the back of his head for over eight years. He believes the condition first began with regular trips to the barber to have his hair cut, which is in line with the hypothesis that this scarring folliculitis is caused by razor bumps (It also resembles the appearance of barber’s rash in early stages). He sought out treatment to make the AKN razor bump go away, beginning with a series of steroid injections at a different clinic. This course of medical management proved ineffective as a means to get rid of his back of the head razor bump for good. 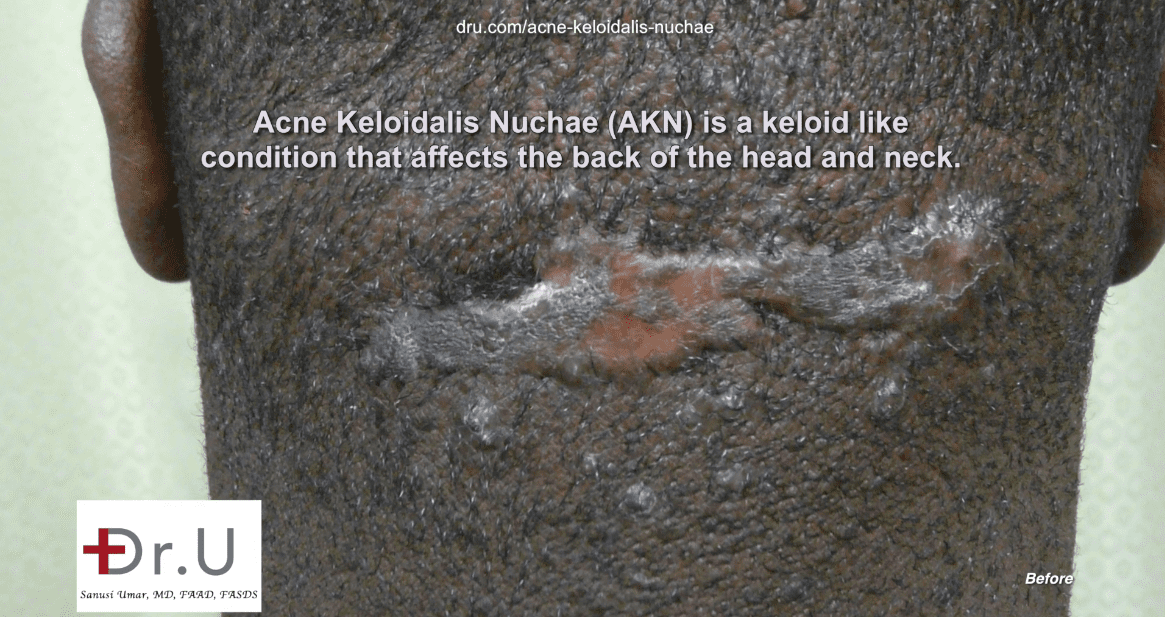 Surgical removal of AKN lump would be necessary after steroid injections failed.*

Get Rid of Neck Razor Bump for Good – Procedure Photos:

For this Montreal patient, Dr. U understood that nonsurgical medical treatments would not permanently rid the patient of his AKN razor lumps and that he would have to cut out a large keloid tumor to achieve the patient’s goal. He developed his own customized surgical methods to remove AKN razor bumps permanently. Many patients with advanced stages of Acne Keloidalis Nuchae will have a large tissue lump at the base of the scalp in the nape area. With these situations, Dr. Umar uses a special excision technique that he developed that would not only remove the large AKN mass, but also result in a  linear scar that is discretely aligned with the posterior hairline. This strategic positioning creates a very discrete outcome that patients can feel confident about. They don’t have to worry about others noticing the wound, or staring at the back of their head. In this particular case, the affected tissue was situated relatively higher on the back of the patient’s head. It was not possible to use the same excision method to align the wound with the posterior hairline. Instead, this unique presentation required a primary closure using the trichophytic technique. With the trichophytic technique, the edges of the wound are cut at angles. Therefore when closed, overlapping the top edge meets the bottom edge creates a more seamless looking outcome. Also, the hair follicles from the bottom edge would then grow through the top edge to cover the resulting scar tissue. As a result, the patient is able to achieve a very inconspicuous looking outcome. Onlookers would have a difficult time detecting any obvious signs of surgery. 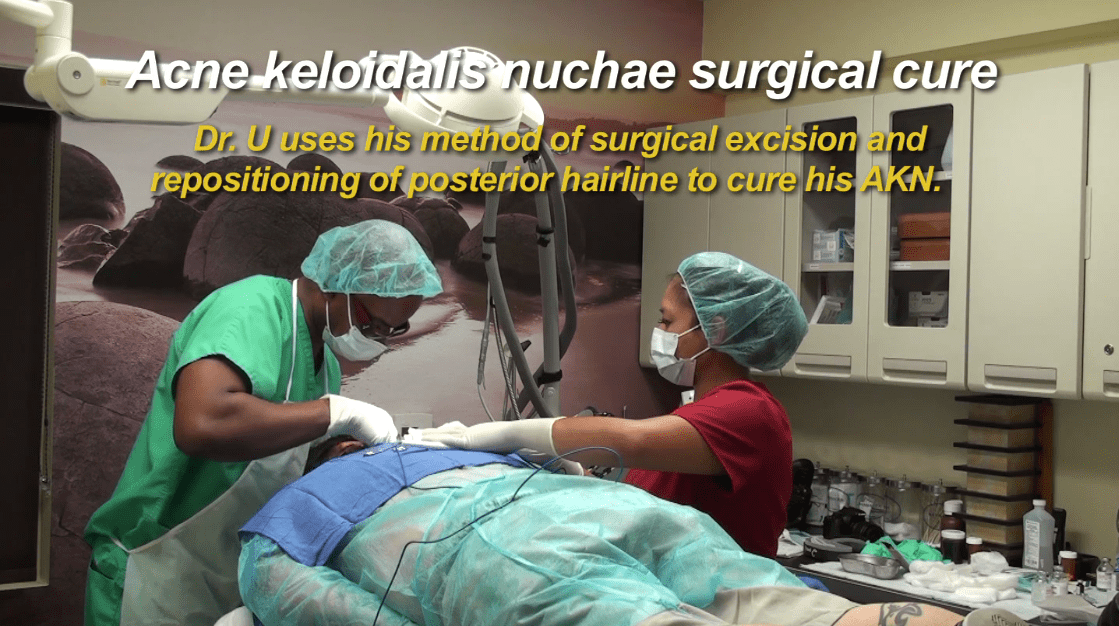 To get rid of the rear scalp razor bump for good in this Chicago patient,  Dr. Umar would use his singular excision technique.

Removal of Wide Bump Growth on the Back of the Head in a Montreal, Canada Patient Before and After Results Photos:

Surgical treatment of his razor skin bump, or mass on the back of the head, proved incredibly successful under Dr. Umar’s care. Two months after the surgery, the patient’s scarring is nearly undetectable and any large or wide bump growth on the back of the head is now gone. The excision technique employed at Dr. U Skin Clinic for acne keloidalis nuchae patients proved once again to be the leading intervention available. When Dr. Umar asked if he’s happy with the result, the patient responded, “My wife said, ‘I am going to throw a party!’” 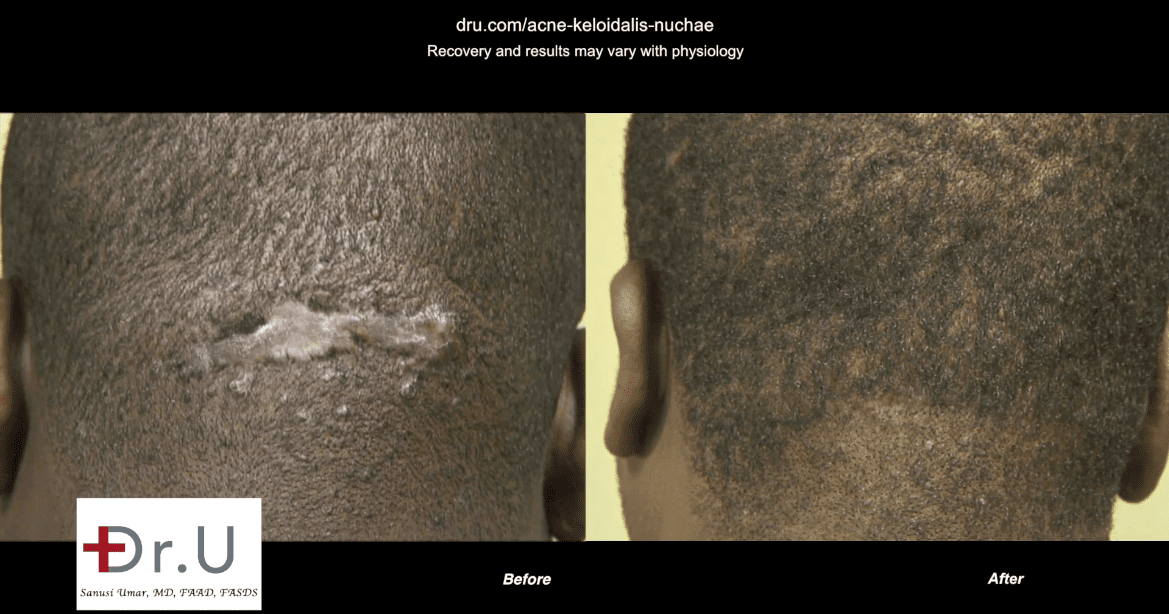 Dr. U Skin Clinic makes it possible to remove large razor bump growth on the back of the head.*

Watch the video of this patient’s highly successful surgical removal of AKN lump/bumps.

Is acne keloidalis nuchae always caused by close shaving and the formation of razor bumps?

Acne keloidalis nuchae, or AKN, or razor bump on the back of the head is a type of scarring folliculitis for which the exact etiology is unknown. In other words, many suspect that razor bump growth on the back of the head may cause the disease, but this has not been proven. It is believed that excessive inflammation of the tissue surrounding ingrown hair follicles causes AKN, and this can result from any type of continual or repeat friction to the area. This includes friction from shaving, a stiff shirt collar, a hat or headband, etc. The disease typically affects people of color (with curly or straight hair), which also remains a mystery to the medical community.

Could a laser be used to treat AKN patients, with a big lump on the back of the head like the subject in this video?

Laser technology can be used as a treatment for big lump on the back of the head. This method is only effective in the earliest stages of the disease, when the bumps are small, just like razor rash. Dr. Umar uses the ND: YAG laser treatment to target small AKN bumps, to destroy the trapped hair follicle that is causing the irritation. This can be an effective option to make AKN razor bumps disappear once and for all. However, the subject in the video would not have benefited from laser therapy because the stage of his AKN was too advanced.

What causes AKN bumps to become such a large tissue mass?

AKN bumps tend to grow into a large tissue mass or keloidal plaque over time if the condition is not treated or managed early on. As the ingrown hair follicles cause untreated inflammation, the inflamed area expands and becomes infected. These various small bumps, or individual infections, become impacted with pus and eventually coalesce as they populate the small surface area they’re affecting. Once they’ve reached this stage, the inflamed skin starts to scar and harden into a large tissue mass. At this stage, the only way to alleviate the condition is through surgical removal of the AKN lump.

If you’ve got a question about AKN treatment or AKn in general that hasn’t been addressed here, please feel free to get in touch via out Ask Dr. U portal by clicking the button below: