Surgical Removal of Keloid in Earlobe Piercing By Dr.U

Keloid tissue growth on the earlobe may often occur in individuals with dark skin tones who have ear piercings. This Brentwood, Los Angeles patient made the decision to have her ears pierced. Shortly afterward, a  keloid developed in the form of a large hard lump on the earlobe. Although she had received steroid injection treatments at another dermatology clinic, they did not help. For certain individuals, the best way to remove a keloid in an earlobe piercing is through surgical excision. Dr.U decided that this patient was an excellent candidate for this approach.

Photo of Dr. U’s Patient With Large Hard Lump on the Earlobe Before Treatment

Here is an image of the keloid which had developed around the patient’s ear piercing. The piercing itself prompted the overgrowth of collagen fibers, resulting in a rather noticeable formation. 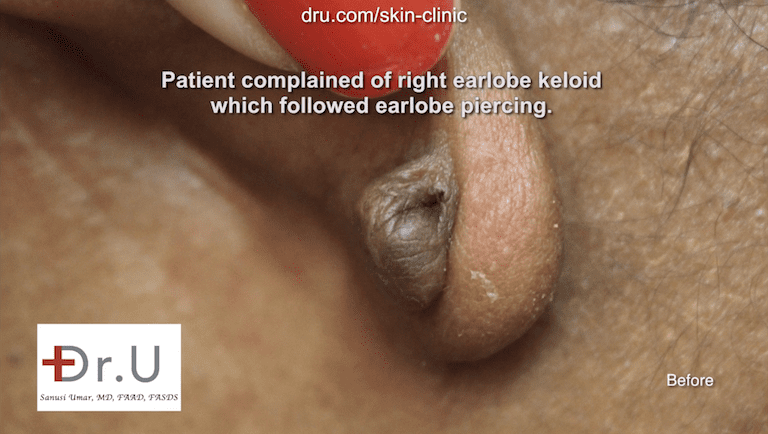 Brentwood, Los Angeles patient with keloid growth on earlobe before her surgical treatment with Dr.U

Keloid tissue tends to develop when tension is exerted on a cut or wound in the skin. The downward pull of heavy earrings can, therefore, promote the formation of keloids in genetically predisposed individuals.

At almost one centimeter in length, surgery was needed to get rid of keloid on the earlobe

Dr.U applied a flap excision technique for this patient’s surgical earlobe keloid removal. Simply removing the growth on the earlobe and closing the area would have produced wound edges that emitted chemical signals to prompt the formation of scar tissue. This approach increases the risk of the keloid recurring through the proliferation of collagen I or III within the scar itself. Instead, he applied a flap section from the keloid to prevent this signaling along the edges of the wound.

These before and after photos show the complete removal of the keloid formation. The back of the treated earlobe is now flat. 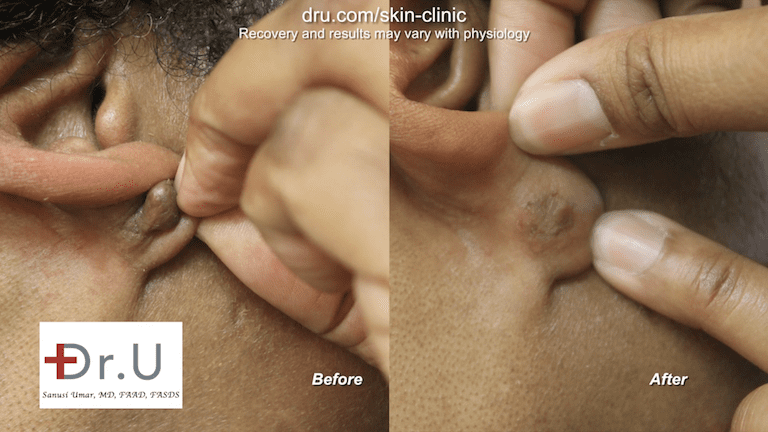 A keloid in an earlobe piercing may be effectively removed through flap excision surgery. Here are before and after photos of this patient’s procedure. 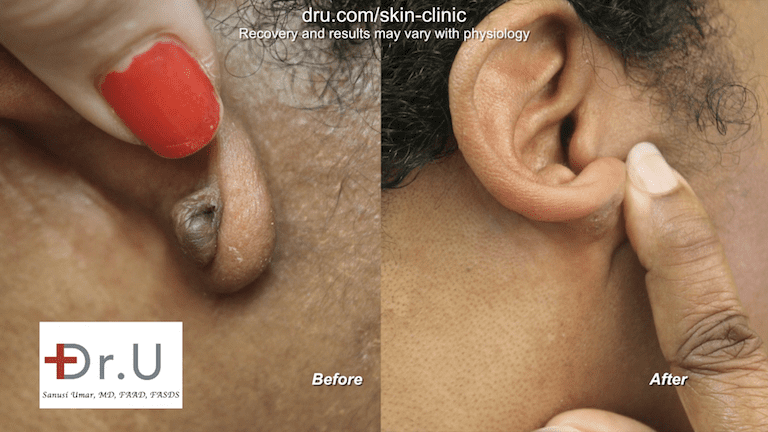 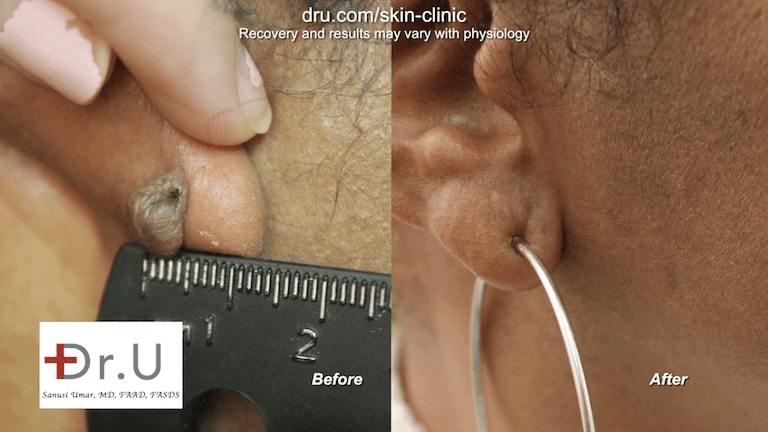 Brentwood patient is now able to wear her favorite earrings after her earlobe keloid removal surgery performed by Dr.U

Due to Dr.U’s use of flap excision, the patient does not have to worry about the keloid coming back. The photos of her results were taken one year after her procedure. She is able to continue wearing hoop earrings.

Watch this video to learn more about this patient’s surgery for earlobe keloid removal.

If you live in the greater Los Angeles area and are interested in removing a keloid in an earlobe piercing submit photos and pertinent information about your condition through our complimentary online consultation form.

FAQ – Removal of Keloid in an Earlobe Piercing

What types of individuals are most at risk for developing a keloid in an earlobe piercing?

Keloid formations can occur in anyone. Individuals with dark skin tones are fifteen to twenty times more likely to develop them. Other risk factors include having a family history as well as being under the age of thirty.

Since wearing earrings is a more common practice in women, compared to men, keloidal complications tend to occur more in females.

Are there other methods available to get rid of a keloid on the earlobe?

Yes. Other methods for keloid removal on the earlobe include excision, punch dye laser treatment pressure devices, cryotherapy, Grenz zone radiation therapy, corticosteroids and antimetabolite injections such as bleomycin. The treatment choice often depends on how old the patient is.

Is it possible to develop a keloid in an earlobe piercing if the person wears studs and not large, heavy earrings?

Yes, it is possible for keloid formations to occur, even in individuals who wear studs. Although the tension caused by heavy earrings is one factor, another contributing variable is the metal content of the earring back piece.

The patient case described above illustrates a rather common occurrence. In fact, the Australasian Journal of Dermatology published a study which investigates why there seem to be more incidences of keloids form on the back of the earlobe, compared to the front. It would seem that the material used for the post is more likely to be the culprit. But in fact, the study found a very strong correlation between the use of metal backs and the formation of keloid lumps on the back of the earlobe.

Dont see your question about earlobe keloid treatment above? Use this button to ask Dr. Umar:

Learn how to prevent complications from ear piercings

Read about how Dr.U repairs split earlobes resulting from heavy earrings and trauma

earlobe keloid
About the author

What is EMSCULPT? Why This Procedure Will Help You Crush Your 2020 Fitness Goals Fast
January 30, 2020