The Walnut Park patient, whose case is detailed below, struggled with razor bumps behind head, which started to merge into a large, cluster-like abrasion. After many years of shameful discomfort enduring the cosmetic effects of this folliculitis, he was persuaded to seek specialized treatment for the AKN hard razor bumps behind his head by his barber. Surgical treatment for AKN bumps is often the only way to permanently remove these cumbersome bumps, which can look similar to acne in its initial stages.

Before Bumps on Scalp Pictures

Before his visit to Dr. U’s clinic in Redondo Beach, California, the Walnut Park patient noticed the razor bumps behind head, scalp, and neck amalgamating into a visible concentration. These bumps resembling pimples on the back of the head caused hair loss along the back hairline, creating more visible damage. 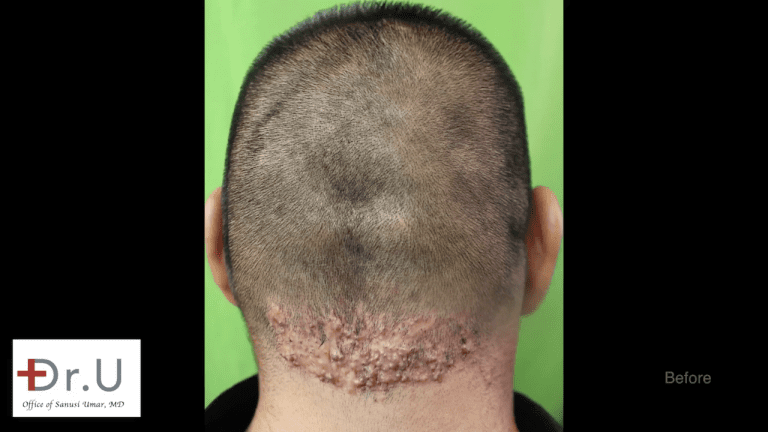 The Walnut Park patient sought a cure for chronic razor bumps behind head after previous treatments at other clinics had failed.

While he, fortunately, did not experience other familiar symptoms of acne keloidalis nuchae (like discharge, odor, and itching), he was still embarrassed by the condition. The unappealing appearance of the skin ailment inspired him to seek out a surgical treatment of the AKN razor bumps behind head surgery from Dr. U. 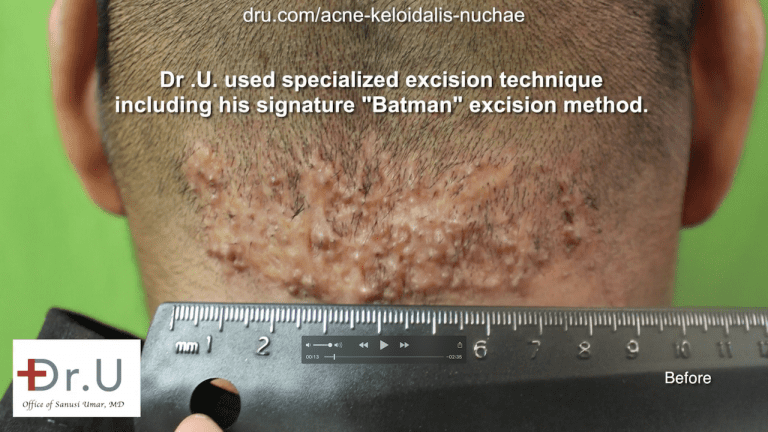 This Walnut Park patient endured symptoms of AKN like a bump on head for years before consulting at the Dr. U AKN Bump Clinic.

Treatment of Lumps on Head Under Hair Procedure Photos

During the initial consultation, Dr. U thoroughly evaluated his Walnut Park patient’s particular case, Dr. Umar takes an individual approach to each case to determine the best course of treatment for a particular manifestation of AKN. Measuring the height and width of the hard bumps on the back of the head and scalp showed that the razor bumps behind the head were at Stage II, where the AKN progressed to the initial stage of flat plaque.

The stages of AKN, which can look like lumps on head under hair, are depicted above.

Due to the advanced stage of his AKN bumps, remission with medical treatments like corticosteroid injections or topical antibiotics was not likely for the Walnut Park patient. These non-surgical treatments for AKN bumps typically only prove helpful in the earlier stages of AKN disease. 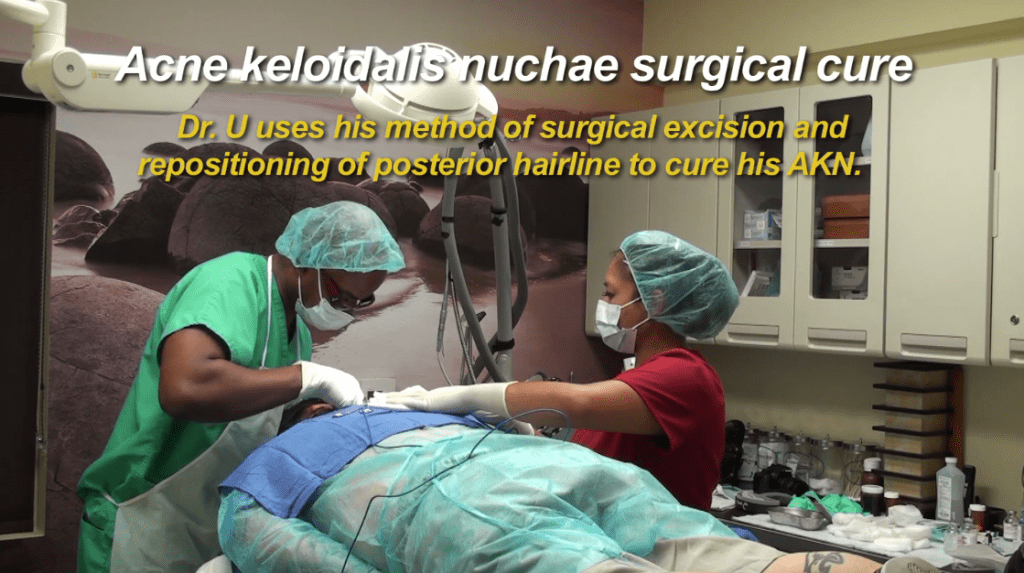 Dr. Umar performs his unique excision method to remove the pimples on back of head affected by AKN.

After enduring this condition for so long, the Walnut park patient was ecstatic with the results of his procedure. Even though he was inundated with a Stage II amassment, Dr. Umar’s AKN excision technique yielded a relatively thin linear scar along the posterior hairline. The Walnut park patient’s only regret was not seeking intervention for his razor bump behind the head sooner. 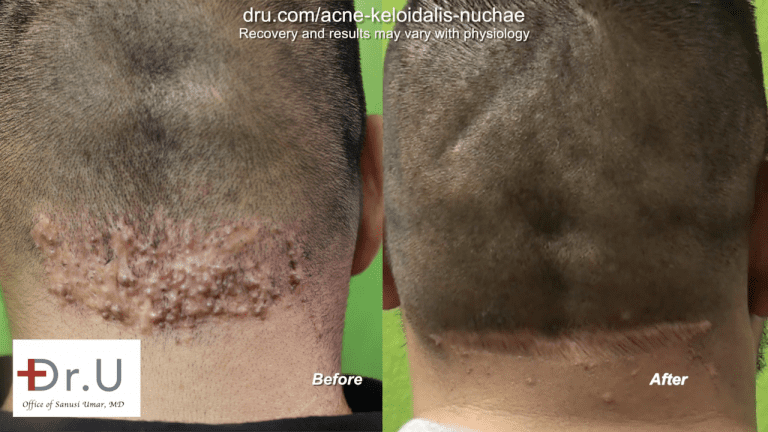 This patient finally found a cure for razor bumps behind head with Dr. U in Los Angeles. Dr. U’s unique surgical excision technique helped return this patient to his normal cosmetic appearance.*

While other surgical procedures for AKN razor bumps behind the head may form an inverted “U” shaped scar, Dr. Umar’s special excision method typically encourages cosmetically unacceptable scarring along the rear hairline. 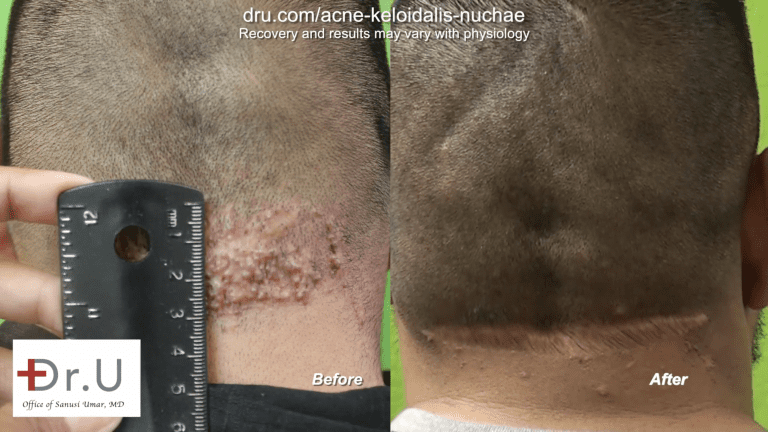 When a bump in back of head hurts, many do not know where to pursue treatment or what initial steps to take. This Walnut Park patient finally found a surgical cure for the AKN pimples on the back of the head and neck with Dr. U.*

Watch the video below to see the full results of the Walnut Park patient’s acne keloidalis nuchae surgical treatment at the Dr. U AKN Clinic.

After living with AKN for more than 10 years, this patient approached Dr. Umar for an AKN removal surgery. The results of the surgical removal of the back at the back of his head had a life-changing impact.
Akn-002-00127dru-1

Worried about troublesome pimples on the back of the head and neck? Click the button below to consult Dr. U online.

I’ve had a bump on head for years. Is it AKN?

There are several conditions which can cause bumps on the head. Seeking medical assessment is recommended to find the cause of the bump(s).  Acne Keloidalis Nuchae typically presents as pimple-like bumps on the back of the neck. These bumps can go untreated for a long duration of time, due to their preliminary resemblance to a barber’s rash. In fact, many patients are even referred by their barbers to consult a dermatologist for persistent bumps on the back of the head, as a barber’s rash typically subsides over time, while AKN progresses.

Is there a non-surgical treatment for lumps on head under hair?

Yes. While not typically a permanent solution, non-surgical medical includes treatment with prescription medication, both oral and topical, to target the folliculitis that forms painful, itchy lumps and bumps on the back of the head and neck. The only permanent treatments, however, are acne keloidalis nuchae laser treatment and surgical excision of the bumps.

Why is it that a bump in back of head hurts and discharges fluid?

It is best to consult a physician near you for assessment of the bump discharging fluid on the back of the head, as there could be several causes. Some cases of acne keloidalis nuchae present similar symptoms in earlier stages. In these cases, pus emerges from the white blood cells fighting the infection from their AKN.

Have more questions for Dr. U about razor bumps behind head? Click the button below to submit them.

See how this New York patient found a surgical cure for his AKN with Dr. U

Learn what Dr. U has to say about ablative therapies for acne keloidalis nuchae.