Dr.UGraft™ Bad Hair Tattoo Before and After Repair in a Pasadena Patient

In this case, Dr. Umar performed a bad hair tattoo before and after repair with a FUE hair transplant using his unique Dr.UGraft™ technique on an African-American patient from Pasadena. Previously, the patient had scalp micropigmentation (SMP) done on his temples and hairline. However, he was not happy with the results of his micropigmentation procedure because the ink turned blue and didn’t blend correctly with his natural hair. 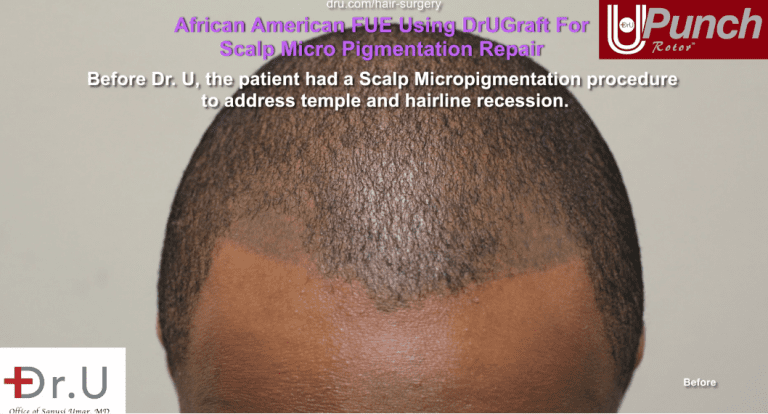 An example of bad African american scalp tattoos, before Dr.UPunch. 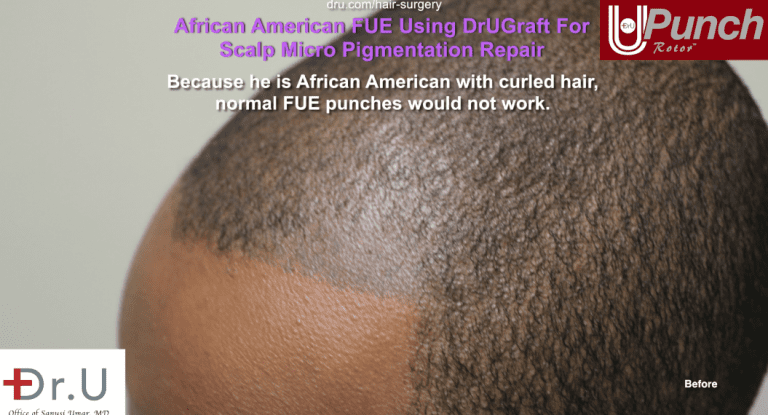 A botched tattooed hairline before Dr.UPunch.

Before the patient visited Dr. Umar, he had undergone a scalp micropigmentation (SMP) procedure by another practitioner. The patient was unhappy with the results of his SMP for two reasons:

Overall, this caused his SMP to look extremely unrealistic. The patient had originally sought out scalp micropigmentation because as an African-American, he didn’t believe he was a candidate for a hair transplant. Unhappy with his appearance, he scheduled an appointment with Dr. Umar to explore his options for repairing his botched tattooed hairline. 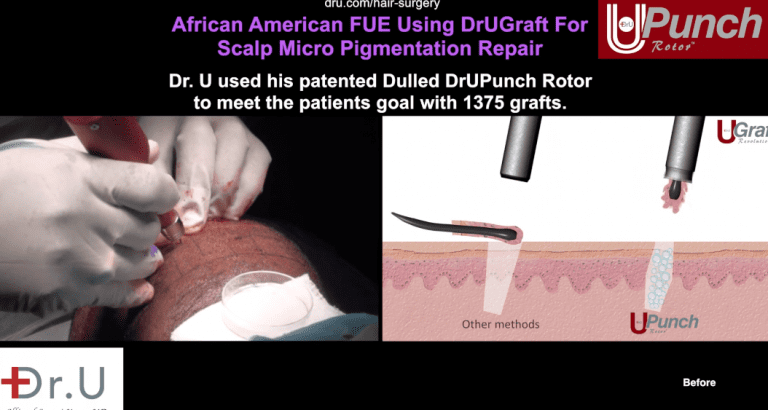 Dr. Umar used his patented, dulled Dr.UPunch Rotor to perform an FUE hair transplant on the patient. Because the patient is African-American with curly hair, he would not be a suitable candidate for a traditional FUE hair transplant, which can only be performed on patients with straight or wavy hair. However, the patented Dr.UPunch tool allows for FUE on all hair types. Dr. Umar filled in the patient’s hairline and improved overall hair density with 1375 grafts.

Bad Hair Tattoo Before and After Repair Photos 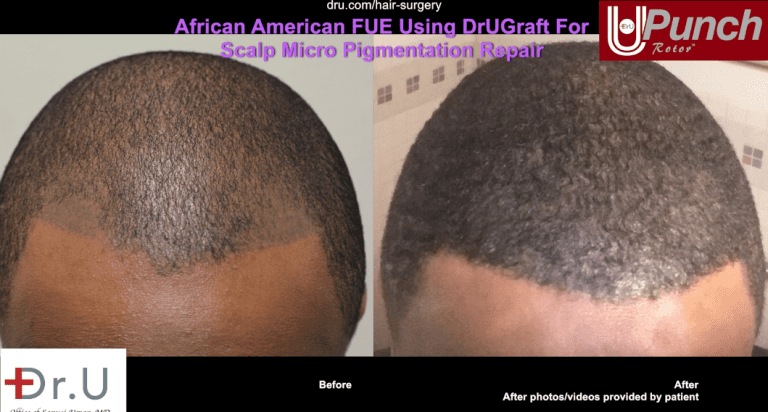 The patient’s bad hair tattoo before and after repair.* 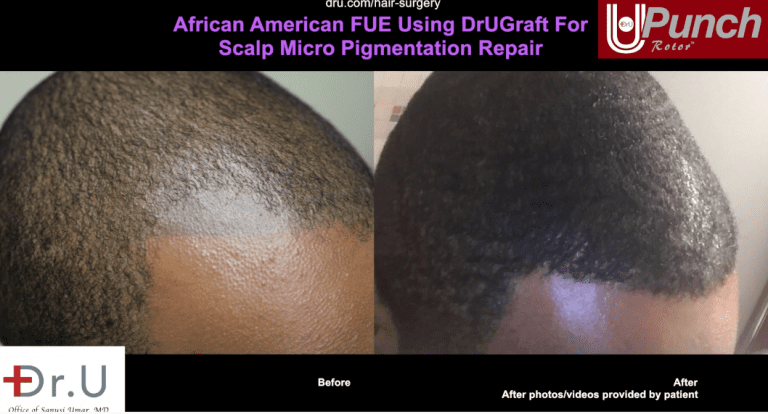 The results of bad hair tattoo repair by Dr.UPunch.*

These photos, taken 11 months after his procedure, show the patient’s results. Dr. Umar was able to use his Dr.UGraft Revolution system to perform a bad hair tattoo repair on the patient, and the patient was ecstatic with the results.

For more bad hair tattoo before and after repair pictures, watch the video below.

This case is a great example of how a Dr.UGraft FUE hair transplant can be used to repair a bad hair tattoo. Dr U and his Dr.UPunch Rotor produces amazing results on patients with curly hair, as demonstrated with this patient.

What is the cost of repairing a bad hair tattoo?

The price of repairing a bad hair tattoo is dependent of various factors. When consulting with Dr. Umar, you will discuss the number of grafts as well as the amount of needed trichopigmentation.

What are the pros and cons of hair tattooing?

What is the difference between hair tattooing, scalp micropigmentation, and trichopigmentation?

Hair tattoos, scalp micropigmentation (SMP), and trichopigmentation vary in the gauge and design of the needles, the pigment used, and the application technique. Tattoo artists perform hair tattoos with the same needles used for traditional tattoos, which are too large and round to properly mimic the appearance of hair. Additionally, hair tattoos use traditional tattoo pigment, which is prone to turning blue or green in a result called the Tyndall effect. Trichopigmentation and SMP use smaller needles specially designed to create the appearance of individual hairs. SMP and trichopigmentation differ on the types of ink used and the depth of the pigment placement. SMP is permanent, but vulnerable to the Tyndall effect, while trichopigmentation only lasts for two years but is more realistic-looking.

Who is a good candidate for trichopigmentation?

Not sure whether trichopigmentation or a hair transplant is the correct option for you? You can reach out to Dr. U with any questions on your hair restoration by clicking through the button below:

afro-textured hair
About the author

Getting Rid of DPN or Black Skin Tags on the Face and Neck with Dr. U
October 10, 2018
Search Site
Recent Posts
Recent Comments
Categories